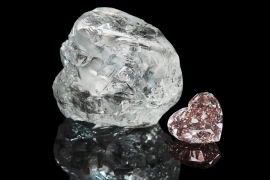 48 hours after announcing their intention to purchase the Merlin Mine, Lucapa hosted an invite-only event showcasing two of the largest, most expensive, and rare diamonds ever seen in Australia. The diamonds were a 15-carat heart-shaped pink gem and 213-carat top-color white gem.

The 15-carat pink gem was polished from a 46-carat diamond recovered from the Lulo mine in Angola. Lucapa recovered the 213-carat rough white diamond from the Mothae mine in Lesotho. Recent auction sales of similar diamonds place the combined value of the stones at more than US$10 million.

“Now that the Argyle mine has closed down, Australia has no diamond producers. The Merlin mine has not operated for a number of years, but we are hoping to change that soon,” said Stephen Wetherall, CEO of Lucapa. The diamond company intends to put Australia back on the diamond-producing map.

Earlier this week Lucapa announced they had struck a deal to acquire the Northern Territory's Merlin diamond mine for US$17.8 million, which they intend to fund with private and public sales of their shares. Merlin is famous for producing Australia’s largest diamond on record, a 104-carat gem.