DPA Launches Women Self-Purchase Campaign: ‘For Me, From Me’ 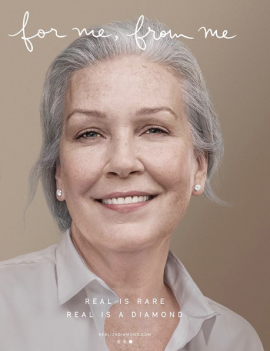 The Diamond Producers Association (DPA) yesterday announced the third wave of the Real is Rare, Real is a Diamond campaign. Entitled ‘For Me, From Me’, the campaign is inspired by the natural diamond industry’s strongest growth engine, women self-purchase, which today represents one-third of all diamond jewelry sales in the US, a $43 billion diamond market that grew +4% in 2017, according to De Beers Group data. The $10 million–$15 million campaign will include digital, print, television, and out-of-home components. Its videos will debut during E!’s Oscar coverage on February 24. The activation will include innovative picture-in-picture units on-air before traditional commercial breaks as well as photo gallery takeovers on Instagram and EOnline.com. View the videos here.

The campaign targets women between 35 and 55 years old, though the DPA notes that it hopes to attract a wide group, as one-third of all self-purchases are done by millennials. DPA says that the standard self-purchase price point is between $500 and $2,000, with a median of $1,300. The campaign was created with the needs of the retail community in mind. The fully integrated mix of assets including video, stills and in-store collateral will run through Fall 2019 across TV, digital, print and out of home. An expanded assortment of customizable in-store materials including tagged video, print and digital creative, visual merchandising support and POS materials give retailers the tools to amplify the campaign and further leverage the national marketing investment.

“Previous Real is Rare, Real is a Diamond campaigns established diamonds as the ultimate symbol of realness and authenticity in love and in life,” said Kristina Buckley Kayel, Managing Director of North America for the DPA. “Our latest campaign celebrates the distinct pride and joy women feel in purchasing a diamond for themselves, a celebration of self that is beautifully embodied by the enduring qualities of a natural diamond. It’s timely for the diamond industry to acknowledge the different needs and mindset of the female self-purchaser and position itself to optimally service her.” She says that For Me, From Me “communicates a simple message, and retailers play a critical role in making it mainstream." The DPA plans to on-board leading retailers into the program during the enrollment period, which runs through June, at which point, the paid media campaign will be running on all platforms. Retailer assets will be available for order starting the second week of March by visiting shop.diamondproducers.com.