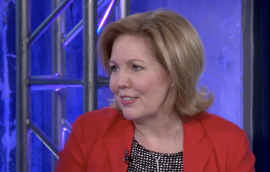 Signet CEO Virginia 'Gina' Drosos recently spoke with Yahoo Finance about digital marketing and millennials, providing some candid perspectives about the thought process of the retail giant. Perhaps her most ringing comment, however, was about laboratory-grown diamonds. Asked whether Signet would consider carrying the fabricated stones, she first appeared to hedge, saying, "At Signet, we are always looking at trends and things we think our customers might be interested in," then adding, "What our research indicates, though, is that for that very special purchase of a diamond engagement ring, people really want a real diamond."

Drosos also discussed the company's expansion of its digital marketing efforts, noting that Signet had doubled its digital spend while cutting TV advertising from more than two-thirds of their total advertising to less than half. "That is important because we can much better target customers in digital. Less than two percent of Americans will get engaged in the next year, so blasting out a new TV ad is not nearly as targeted and as efficient as when we can target people with digital marketing.”

Yahoo interviewer Julia La Roche, a millennial herself, asked how Signet is adapting to an environment where people have been delaying getting married, and where "some of us are forgoing the engagement ring altogether." Drosos says, "There are some things that are very different about millennials, but there are some things that are the same. One thing that is the same is that millennial consumers are equally as likely to want to commemorate their engagement with a diamond ring. They are getting married on average three years later, on average it is now 27 for women and 29 for men. Very often they have a very different, less linear path of their relationship than their parents did. In fact, 40% of our bridal shoppers already have kids. These are important things for us to know."