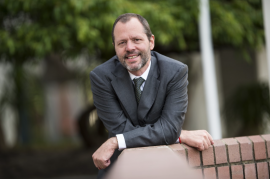 Jean-Marc Lieberherr, CEO of the diamond marketing organization Diamond Producers Association (DPA), spoke with Melissa Smet of De Belgische Diamantnijverheid, the quarterly magazine of the Syndicate of the Belgian Diamond Industry (SBD), about the mission, current progress and future plans of the DPA, as well as some key industry issues. The DPA set up shop and was launched in 2016, but their first real year of investment was 2017, and they invested about $57 million on generic marketing. "For 2018 we have about $70 million of budget", says Lieberherr, "about $50 million will be invested in the US market, and of these $50m about $40m will be invested in media." They launched two new films in November, in addition to the two introductory films from 2016, which still receive airtime, and are also focused on native advertising - partnering with programs and integrating their advertising message within the flow of those programs. "This is what we did with the 2018 Winter Olympics", he says, and they will continue to associate it with "big events, mostly the kind of millennial events (like the MTV Movie + TV Awards and there will be more in 2018)."

Asked about the DPA's upcoming launch in China and whether they will be targeting Europe, Lieberherr said, "We are going to be launching in China around mid-year. For smaller markets like Europe, Japan, The Middle East, … we are not planning to launch advertising campaigns per se, but we are planning to have a voice. We are developing a model, that we have called DPA Light, which allows us to start advocating for diamonds and the diamond industry in smaller markets where we don't have a direct presence. We are starting in France in April," he continues,  "and we are looking at other markets for 2019 like Germany, Russia, Italy, maybe Belgium? We are not ignoring the smaller markets".
Speaking of a diamond campaign in Belgium, the obvious question is about how Antwerp, the diamond capital, fit into the DPA's plans. "Antwerp clearly is the rough capital of the world. There is no place in the world where more rough transactions go through than in Antwerp, because it has a great reputation and an enabling ecosystem for diamonds. We should not be complacent though; it is always important to add value and above all to ensure you provide a modern trading environment. Personally, I would also love to see Antwerp become the polished diamond retail centre for Europe."

A community of women

"The other thing we will continue to do in 2018", Lieberherr says, "is to put money behind telling the story of diamonds. What we have found is that, in the US in particular, the voice of diamonds really hasn't been there for the past 10 years." In addition to giving diamonds a voice, the DPA wants to give them a face - in particular, the face of women, and more specifically those involved in the diamond industry. "And that is going to be a big thing for 2018: diamonds are a matter of women and this will be communicated to the market and to female consumers in particular. Countless women are involved in the diamond sector, whether it is in diamond exploration, mining, cutting and polishing, jewelry designing and manufacturing, retailing and then, of course, buying and wearing them. When you think of it, diamonds actually bring together a community of women around the world, involved in making it happen, and that's something we really want to emphasize. We also started a series, called Faces and Facets, where we portray woman in the industry, which we play in movie theaters across the US."

"Our number one priority is to create an emotional connection between diamonds and younger generations, by expressing that diamonds are relevant to them", Lieberherr reiterates. "Everywhere in the world, whether it's here or in the US, China or India, we are finding that authenticity, sincerity, meaning is what younger generations are looking for. I think the wave of blind consumerism characteristic of the nineties is gone, and instead consumers are looking for things of real value. What I mean by value is inherent value, but also symbolic value and experiential value. So the trend is towards fewer, more meaningful things as opposed to lots of meaningless stuff. This is great for diamonds: what's more meaningful, what's more genuine than a 3 billion year old diamond, a unique symbol of love and commitment passed from generation to generation?" He adds, "DPA marketing really acts at that very fundamental level of making diamond as a category, as an idea, socially, culturally and emotionally relevant to consumers.  We are focusing on enforcing that emotional bond, because that is the strongest base on which the diamond industry is built and will flourish."

Smet asked the CEO about the reputation of diamonds and the plethora of negative press the trade is often the victim of, most recently concerning the Nirav Modi fraud case. Do negative stories like this make the task of the DPA more difficult? "Frankly," says Lieberherr, "it makes the task of the whole industry a lot more complicated. We are increasingly facing reputational challenges, which are to a large extent undeserved, so when something like that unfolds it makes the task of industry advocates like us very difficult. Our credibility is at stake. Much of the media and the general public is stuck on an old narrative and image of diamonds, and we need to change that. This is partly the role of the DPA. Stories like what has happened with Nirav Modi and Mehul Choksi set us back." He illustrates with a story from his mining days with Rio Tinto: "In mining safety we have a saying: 'The behaviour you pass by is the behaviour you tolerate'. This could apply to the diamond industry. How much are you ready to tolerate when your whole sector rests on a promise of love and authenticity?"