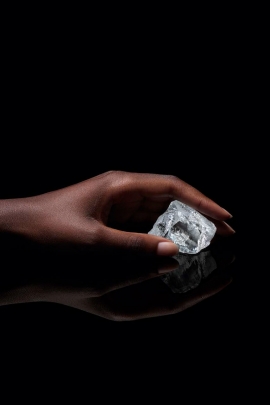 The New York Times writes about how luxury brands who are not typically identified with the high jewelry category are drawn to big and exclusive diamonds, as a path to be part of what is considered a growth segment. LVMH's Louis Vuitton, partnering with high-end miner Lucara and Belgium-based manufacturer HB Antwerp, the newspaper reports, aims to continue its legacy of creating bespoke pieces, with the 1,758ct enigmatic Sewelô, and the 549ct clear white Sethunya. Potential buyers will be part of the entire journey from rough to polished, and will be invited to decide on the outcome and witness the months-long process in Antwerp.

Tiffany & C°, recently acquired by LVMH and led by Louis Vuitton's Michael Burke, the article continues, is taking the same route to high jewelry, demonstrated by the remake of a vintage necklace, with a massive 80ct oval diamond as centerpiece. Sources who attended the LVMH-Tiffany townhall meeting with employees earlier this month claim LVMH boss Bernard Arnault "wants to elevate Tiffany's standing, even if that took time", Reuters reported. The French luxury conglomerate is said to be planning a revamp of existing stores as well as expansion into Asia and Europe. Alexandre Arnault, Bernard Arnault's son, will be in charge of realigning Tiffany's marketing messages alongside new CEO Anthony Ledru.