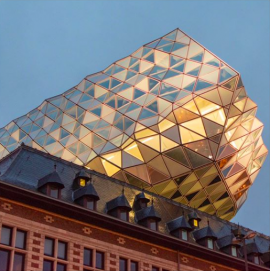 The cautious optimism that had returned to the Antwerp diamond industry following a robust month of trade in January - and into February for the rough trade - turned out to be short-lived, as the explosive spread of the novel COVID-19 coronavirus first closed the Eastern markets and gradually made its impact felt across the global diamond industry. Antwerp's rough-diamond trade enjoyed the boost from the miners' strong early sales and its rough-diamond imports fared well across the three-month period, but eventually the global pandemic limited travel, human interaction and compelled the Belgian government to shutter businesses across the country.

Antwerp’s polished-diamond trade was the hardest hit in the first quarter, as it experienced immediately the impact of the spread of the coronavirus in China, including the postponement of the Hong Kong International Diamond, Gem & Pearl Show and the Hong Kong International Jewellery Show. These shows represent key selling events early in the year. When the dust settled on the quarter, Antwerp’s polished diamond trade had relinquished about 45% of its value compared to Q1 2019. Polished exports fell 45% to $1.7 billion from $3.1 billion a year ago, as the volume of goods sold dropped by 25%. Polished imports fell 43% to $1.8 billion from $3.2 billion in 2019, with the volume of goods sold declining by 29%.

The next category to feel the impact was rough-diamond exports, as demand from (mainly Indian) manufacturers gradually started to slow. Rough-diamond exports from Antwerp fell 26% to $1.9 billion from $2.5 billion in Q1 2019, while the volume of goods exported declined 17% to 22.6 million carats. Rough-diamond imports started the year very strongly but gradually became interrupted in March. On the back of strong early sales from the major miners, Antwerp’s rough imports during the first three months of the year increased 2% in value to $2.125 billion, while the volume of rough goods imported increased by more than 18% to 23.4 million carats. This is where the positive signals fade.

The Antwerp World Diamond Centre (AWDC) today announced preliminary figures show that, since the start of April, Belgium’s diamond trade has fallen to just about 4 percent of its trade levels in the same period last year. “Each link in the chain of the international diamond trade has come to a standstill,” said spokeswoman Margaux Donckier. She added that the early signs of recovery from China’s jewelry trade provide a “glimmer of hope.”

The AWDC explained that such a decline was anticipated, given the fact that the diamond trade is “extremely sensitive to economic change.” During the financial crisis of 2008, for instance, the diamond trade declined initially by about 50 percent, but recovered quickly. This crisis is turning out to be much larger still. “Several diamond mines have simply halted production; airplanes around the world are grounded and cannot transport diamonds; manufacturing units are shuttered, and most jewelers have closed their doors,” Donckier said. “All of which results in the inability of Antwerp diamond traders to do business, despite their best efforts.” In the meantime, traders will have to follow closely the measures taken by countries across the globe to gauge where opportunities arise ... such as in China, where it appears that consumers are rushing back to the jewelry shops after months of lockdown. "We hope this phenomenon will recur around the globe," Donckier concludes.