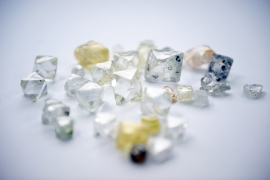 Russian diamond mining major Alrosa went ahead with its March rough diamond sale despite the global pandemic virtually shutting down the industry, so the modest results they booked were anticipated. Alrosa sold $148.7 million in rough diamonds last month, representing a 57% decline from their February sale ($342.3 million) and a 60% decline from March of 2019 ($369.2 million). Rough sales for the first quarter fell by 11% to 881 million from $988 million a year ago. Compared to the more robust market atmosphere in 2018, the $881 million in Q1 rough sales is 43% lower than the $1.58 billion in Q1 2018 sales.

"March demand for rough and polished diamonds in all key markets demonstrated a steep decline," says Evgeny Agureev, the miner's Deputy CEO. "The uncertainty in February was followed by severe restrictions and even the suspension of trading because of border closures and quarantine measures across the world. Needless to say that this has had an extremely adverse effect all along the diamond pipeline." Mr. Agureev held discussions with Alrosa's contracted buyers prior to the March sale and after listening to their situation, eventually allowed total flexibility in their contracted purchasing obligations in the form of a 100% deferral option. While not providing details into the level of deferrals, he said that most of their clients maintained their long-term contracts, "though with several companies we had to terminate such contracts and switch to spot sales,” whereby they could select certain goods to purchase.

Ending his announcement on a positive note, Deputy CEO Agureev said, "according to the latest news, the epidemiological situation in China, one of the major diamond markets, is gradually improving and moving towards less strict quarantine measures. This gives us the hope that this market will be the first to start recovering the demand in the nearest future.”