Angola's Tax Revenue from Diamond Sales Up 42% Under New Policy 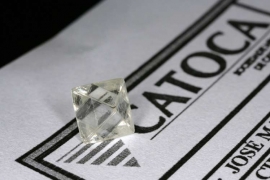 Sodiam, the National Diamond Trading Company of Angola, has announced that the reforms to the legal framework implemented as part of the new Diamond Trading Policy has not only delivered exponential growth in tax revenues from the sale of this gem (+42%), but has also entailed a level of competition and transparency which did not exist previously.

Tax revenues generated by diamond trading have increased 41.6 percent over the last two years in Angola, Sodiam said in a Saturday press release. They explained that the new diamond trade policy also enabled an annual growth average of 8.5% in gross revenues during the last two years compared to the 2.3% recorded in 2016 and 2017. The previous diamond trading model, in force from 2012 to 2016, was based on 'preferential customers' that were pre-authorized under a pre-arranged direct sales procedure, enabling select buyers to enjoy exclusive access to the market to buy the precious stones in Angola.

Sodiam's statement signified a remarkable shift in their openness regarding the country's diamond trade, not-so-tacitly criticizing the previous regime under José Eduardo dos Santos. "In effect," Sodiam writes, "under the terms of the legislation then in force, the Head of the State approved both the list of companies with the status of preferential customer and the percentage of production that these customers could buy."

They continue, stating, "These preferential customers enjoyed the right of exclusive access to the market, being the only ones who could buy diamonds from Sodiam. In addition to this exclusive access privilege, preferred customers additionally enjoyed the right to buy at preferential prices, with a discount, on the market value of the diamonds they purchased." They write that "in the period from 2012 to 2017, only eight companies operated exclusively in Angola under the status of preferential customer and from 2013 to 2017, the companies Iaxhon, Relactant and Odyssey, together, acquired more than 50% of the diamond production."

Having determined that this model turned out to be seriously harmful to the treasury, in 2018 the government approved and introduced a new Diamond Trading Policy that eliminated preferred customers. Under the new model, the basic sales benchmark price is defined in advance under an agreement by the main players in the process, namely the producer, Sodiam and the independent valuator. The purchase is only valid if its offer is equal to or higher than the base sales reference price. As a result of the new measures, Sodiam says, the diamond trading system has recorded several improvements: more than 120 companies are now registered in Sodiam's client portfolio, three new polishing factories have opened and gross revenue in 2017-2018 grew 10.8%, totaling US$1.22 billion; in 2018-2019 it grew by 6.2%, totaling US$1.29 billion.