Profit Margins Might Be the Real Reason Synthetics Are Selling, argues Paul Zimnisky 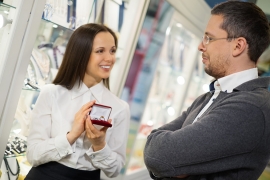 Independent diamond industry analyst Paul Zimnisky examines the growing acceptance of synthetic diamonds from a known but rarely-discussed angle: synthetic diamonds deliver higher profit margins to retailers than natural diamonds. "[Gross margin] is an important metric for a retailer selling both man-made and natural diamonds because the theoretically high gross-profit margin of man-made diamonds serves as an implied incentive to prioritize selling man-made diamonds over natural," Zimnisky writes.  This essay is republished in full from Paul Zimnisky's Diamond Analytics with the analyst's generous permission.

While lower prices as well as marketed ethical and sustainable benefits relative to that of natural diamonds has been the prominent narrative around man-made diamonds, a seemingly less-obvious factor is also likely helping to drive the product: the profit margin they offer retailers.

When analyzing the wholesale and retail prices of unbranded man-made and natural diamonds, it appears that the retail gross margin of man-made diamonds in popular carat-sizes is as much as 1.8-times that of natural diamonds (see below figures).

To further quantify this, for example, in some cases a retailer would theoretically only have to sell $5,000 worth of man-made diamonds to generate the same gross profit as selling almost $10,000 worth of equivalent natural diamonds. Here, “gross margin” is considered to be a retailer’s top-line profit when selling a diamond, i.e. the sales price relative to the wholesale cost of the diamond. (View graph here)

This is an important metric for a retailer selling both man-made and natural diamonds because the theoretical high gross profit margin of man-made diamonds serves as an implied incentive to prioritize selling man-made diamonds over natural – as long as the profit margin differential remains in place. Further, given that retailers are the direct point of contact between a consumer and a diamond, retailers may be more inclined to promote the beneficial attributes of a man-made stone over a natural, thereby influencing a customer’s longer-term perception of the products.

Further, given the relatively lower-production costs of man-made diamonds compared to that of natural (especially notable in larger carat-sizes given that man-made diamonds are a manufactured good), it is theoretically more affordable for the supply chain to offer man-made diamonds to retailers on memo (i.e. consignment). With goods on consignment, retailers typically have lower, or zero, inventory capital costs and can therefore be more selective in offering discounts to the consumer, perhaps resulting in more resilient profit margins.

However, going forward, as the man-made diamond jewelry complex matures, as new producers and better production technology increases supply and as more retailers compete downstream, especially those selling unbranded goods, the product will likely become more commoditized. Resultantly, retail margins could erode and eventually fall to within that of natural diamonds or even lower.

Paul Zimnisky, CFA is an independent diamond industry analyst and consultant based in the New York metro area. For regular in-depth analysis of the diamond industry please consider subscribing to his State of the Diamond Market, a leading monthly industry report. He can be reached at paul@paulzimnisky.com and followed on Twitter @paulzimnisky. Paul will be speaking on diamond industry fundamentals at the Prospectors & Developers Association of Canada (PDAC) Convention in Toronto, Canada on March 2, the Antwerp World Diamond Centre’s 2nd African Diamond Conference in Durban, South Africa on May 6 and at the Jewelers of America National Convention in New York on July 27.