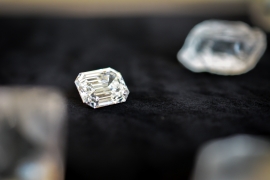 As we welcome a new year and extend our hopes that you, our readers, will enjoy good health and good fortune in 2020, we take a moment to look back at the issues and articles of the past year that most sparked your interest.

Not surprisingly – given the uncertainty that spread throughout the industry during a challenging year of macroeconomic upheaval, razor-thin profit margins in the midstream, a slowdown in global diamond jewelry demand and an oversupply of rough leading to reduced prices and struggles for the miners – stories that articulated the current threats and challenges garnered the most attention.

The growing acceptance and expansion of laboratory-grown diamonds in the marketplace remained a topic of great importance, as did the supply and pricing issues of rough diamonds. Positive developments, such as the rise of mine-to-market initiatives, and in particular Lucara Diamonds’ innovative new rough-diamond sales platform, Clara, also ranked high on our list.

The Diamond Loupe again this past year brought you expert analysis through external contributions and interviews as we aspire to deliver the content you want to read. Without further ado, here are our Top 10 stories of 2019.

1. Is the Diamond Industry Really in a Crisis?, July 23, by Paul Zimnisky

What sparks a reader’s interest more than talk of a crisis? Well, there was certainly no shortage of such talk this year: falling polished prices combined with excessive polished inventories, a financing squeeze on Indian manufacturers and a lack of profitability, low demand for rough, economic uncertainty generated by an unstable geopolitical climate ... take your pick. In this article, independent analyst Paul Zimnisky examines whether all adds up to a 'crisis'.

According to estimates, China has been producing well over 10 billion carats of diamond annually for almost a decade, but most of them have been designated for industrial uses. Now the country’s synthetic-diamond growers are producing millions of carats for jewelry at an increasingly lower cost, with little transparency of the conditions under which they are made. This itself poses a threat, as China will likely become the world’s largest producer of low-cost synthetic diamonds for use in jewelry.

The 2018 iteration of The Tacy Diamond Pipeline takes an uncompromising look at the state of the diamond industry anno 2018. As is his custom, Mr. Even-Zohar voices his view about many of the ills plaguing the diamond industry, particularly in India: companies defaulting on debt, bank fraud and round-tripping, with a particular focus on the impact laboratory-grown diamonds have had on the industry.

4. The Last Diamond Unearthed: The Countdown is On!, February 18, by the Fancy Color Research Foundation (FCRF)

Within a quarter of a century, the majority of the 45 most notable diamond mines operating today will cease to exist, and the last diamond will be unearthed in 60 years. According to the FCRF, diamond prices will rise as supply wanes. Fancy Color diamonds, considered to be the rarest of the rare, will increase in value at an even greater pace, while the “second-hand” diamond market will flourish.

The trade war between the United States and China put pressure on the diamond trade this past year. Called the 'tranche four' tariff, the list of items announced in this round of U.S. tariffs included rough and polished diamonds and loose synthetic suitable for use in the manufacture of jewelry. The Trump administration considered raising the tariff from 10% to 25%, but ‘only’ raised it to 15%. In mid-December, the U.S. and China reportedly reached a “partial” trade deal expected to be implemented in January and should reduce the 15% U.S. tariff on diamonds and jewelry imported from China to 7.5%.

Our friend and independent analyst Paul Zimnisky makes his second appearance in our Top 10, arguing that being too pessimistic about the diamond industry is to underestimate its resilience as a whole and to overlook not only the enduring intangible value of diamonds, but also the impact of what may well become their much more palpable rarity in future.

"We are not trying to blow the [current sales] system up but to make it more efficient. This is not about disruption. It is about market stability." As Lucara Diamond Corp. continues to test and refine Clara Diamond Solutions (Clara), its digital sales platform for selling rough diamonds individually, Lucara CEO Eira Thomas and Steve Lincoln, Sales and Marketing Operations Manager at Lucara and Director Sales and Marketing of Clara sat down with The Diamond Loupe editor Christopher Gemerchak to clarify a few aspects of the system and discuss their progress as they gradually expand their trial phase, which commenced in late November 2018.

A story that reverberated across the diamond industry, from Antwerp to India and beyond: Eurostar Diamond Traders, one of the largest diamond companies in Antwerp, was declared bankrupt by the Antwerp Corporate Court. The manufacturing company, established in 1978 by Kaushik Mehta, was said to have debts reaching up to half a billion euro ($560 million). The bankruptcy was not unexpected, but caused a shudder among investors and the industry nonetheless.

The decline in prices of small, lower-quality diamonds, a staple of many miners, was a constant issue in 2019. Pricing issues hit the industry hard, with an oversupply of smaller stones sending prices tumbling and significantly weakening demand for these types of diamonds. Some miners were concerned about their survival if the market did not undergo a correction, and one – Stornoway Diamonds – was forced to restructure, being taken over by its creditors and going private. Other mid-tier miners such as Petra, Mountain Province and Firestone felt the pain as well. Meanwhile, the majors pursued a 'price over volume' strategy, reducing sales volumes and keeping prices firm, though they ended up lowering prices as well.