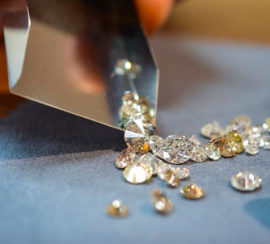 On a more promising note, rough diamond imports during the month increased 32% to $1.2 billion as compared to $929 million imported during the previous November. Also in terms of volume, rough imports increased nearly 20% to more than 15 million carats in November 2019 from 12.7 million carats in November 2018. However, this increase may in part be explained by the timing of Diwali, which took place in October this year instead of November as it was last year. Because Indian cutting & polishing units close for the holiday season, the result is lower rough demand. For the year to date, India's rough imports are down 20%, consistent with global trends.