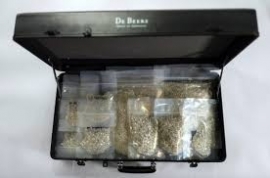 According to the latest reporting by Thomas Biesheuvel at Bloomberg, at Sight 8 (23 Sept. - 27 Sept.) De Beers has once again offered several options to increase the flexibility of buyers struggling with an industry-wide slump caused mainly by an oversupply polished stones in the diamond 'pipeline'. Last month, CEO Bruce Cleaver said, “With midstream participants continuing to work down polished diamond inventory levels and reduced levels of manufacturing in the key cutting centres, De Beers Group provided customers with further supply flexibility during the seventh cycle of 2019.” This almost unprecedented policy has apparently continued.

As with the previous sight, in this week’s sale the miner reportedly gave its clients the opportunity to leave up to 50% of available goods on the table to lower the pressure on buyers without lowering their prices, according to unnamed sources. De Beers also let 'buybacks' increase to 20%, or in some cases 30% instead of the typical 10%. "The measure could allow buyers to increase profits since the rejected stones tend to offer the slimmest margins," Biesheuvel comments. As announced in an internal communiqué to sightholders last month, De Beers said that while they raised the percentage of buybacks, they also said buyers could not use both options (reject 50% and sell back 20%) on the same box of goods.

As Biesheuvel writes, "This year, buyers have grown increasingly frustrated with the cost of rough diamonds sold by De Beers as the prices of polished gems slumped. That’s led to wafer thin margins for their buyers and in some cases losses from the stones bought from De Beers and Russian rival Alrosa PJSC." What is notable with this new buyback policy - where buyers purchase the diamonds and then sell them back to De Beers at an agreed price - is that De Beers will count those purchases toward their 'demonstrated demand' which determines future allocations.

Of course, easing up on the commitment of contracted buyers to purchase has negatively impacted De Beers' sales. Revenues at the Sight 7 in August totalled $280 million, which is significantly lower (-44%) than the $503 million sold at Sight 7 in 2018. For the year to date through August, De Beers sold $2.63 billion, which is down about a billion from last year.