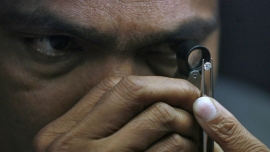 The diamond industry has hit its halfway mark of 2019 and the song remains the same as Rapaport releases their H1 figures detailing across-the-board declines in polished diamond prices amid, as we noted last week, a period of weak sentiment and even weaker demand, all of which is taking its toll on manufacturers and those that supply them. With all the uncertainty in the air as summer is upon us and the autumn ramp-up is closer at hand than one may think, the industry is currently in a holding pattern, taking a wait-and-see approach.

According to Rapaport, the RapNet Diamond Index (RAPI) for 1-carat diamonds fell 1.4% during the month of June, 3.1% in the first half of the year and has fallen 5.6% compared to the same point in 2018. Even with these declines, the price of 1-carat diamonds is holding up the best among all reported categories. The RAPI for 0.30-carat diamonds declined 3.1% in June alone, 12.2% in the first half and 20.9% over the past year, while 0.50-carat goods have fallen by 3.1% in H1 and 7.9% for the year. Rapaport says "Suppliers are reducing prices to raise liquidity, as they’re under pressure from banks to repay their loans," a situation that has been highlighted in recent weeks.

While this sounds like good news for consumers - if retailers pass on the declining prices - it spells short-term concern for those delivering the goods to consumers. The concern does not end with falling polished prices, however, as Rapaport acknowledges: "The diamond industry’s challenges extend well beyond the slump in prices. There’s not enough profit in the midstream. De Beers’ June rough-price cuts were not enough to reboot trading, and cutters are not seeing value in their rough purchases." As a result, "Manufacturers have reduced polished production an estimated 30% to restore the market balance. Cutters are also shifting to smaller and lower-cost items to keep workers occupied. The production of 0.25- to 0.50-carat diamonds remains steady even though sales are slow and prices continue to soften. Rapaport's analysts do not think the miners will escape unharmed either: "Rough sales will continue to slide in the second half as manufacturers focus on profitability rather than turnover." Those miners delivering higher-quality goods, however, may be poised for a breakout of sorts.