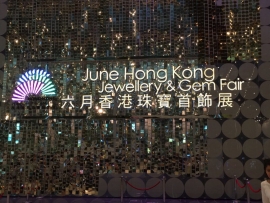 The Hong Kong Jewellery & Gem Fair last week (20-23 June) provided a snapshot of a cautious diamond industry in the midst of a period of weak sentiment and even weaker demand, according to several traders we spoke with this week. And they do not see any quick fixes on the horizon. While it may not be the largest diamond show of the year, Hong-Kong June is the most important mid-year jewelry sourcing event in Asia, and as such provides us the opportunity to take the pulse of the polished diamond trade. The consensus? Sentiment is poor.

Taking place against the background noise of the ongoing trade dispute between China and the US, as well as two major Indian manufacturers rumored to be heading toward bankruptcy and the further tightening of bank lending to people in the trade, activity at the fair was slow, with buyers taking a “wait-and-see” approach, two of the traders we interviewed emphasized. “The atmosphere was not good,” said one trader, “not because of the show itself, but due to the many issues coming to a head in 2019.” All of the people we spoke with pointed to a combination of factors slowing down the market - top of the list being the downward pressure on prices and the resulting lack of profitability, which is “making everyone cautious.”

The pressure on prices is due to several factors, beginning with oversupply. The market already has a disproportionate amount of inventory relative to demand, which not only encourages firms to cut back on polished supply, but also means manufacturers are in no mood to buy rough, as there is no margin in it. Even so, we were told that rough production is still moving at a faster pace than polished demand, compounding the issue.

Secondly, the rumors of manufacturers facing major financial problems is sending ripples throughout the trade. “The Indian banks are demanding their money [from loans], so companies will sell what they can easily move. They cannot easily move real estate, so they will sell their diamond inventories … cheaply. If a really big company needs to liquidate, this could release a significant amount of goods onto the market, and prices will fall further still. So, buyers are waiting, or they are buying less.” This did not, however, cause traders to lower prices to meet the ask of bargain hunters. “I don’t know anyone who had a good show, but nobody was lowering prices,” said yet another trader from a smaller firm. “In that regard it was slow, but stable. Suppliers are not panicking and selling on the cheap. There is just not much demand.”

Thirdly, as another trader pointed out, is the potential for an even larger supply glut due to closures of Chinese retailers. “Chinese retailers are selling, but they are selling less,” we were told. “Their figures are down, and the rapid expansion of retail stores has halted, with about 10% set to close. In China, this is a large number, and their diamonds will be redistributed through the existing stores. With those goods going back to the stores, people need to buy less.” All of which points to jewelers being able to fill their needs without stocking additional diamonds.

“Hong Kong June is a smaller fair, but is typically good,” said one representative of a sightholder company. “There were fewer exhibitors than usual, with gaps in the pavilions. It was slow. There were also far fewer visitors, in the jewelry section as well. Let’s just say there was no ‘buzz’. The reason is the general economic situation globally, and specifically the trade war.” At least one trader disagreed, saying the trade war was not an issue, but it is hard to imagine it is not contributing to the general feeling of uncertainty, and making it harder for buyers to get money out of the country. "The big buyers in recent years have all been Chinese, via Hong Kong, Singapore. But if they cannot get their money out of the country, they don’t buy."

Ultimately, the lethargic atmosphere at the show seems to boil down to the big customers not being in a buying mood. “They were just playing the waiting game, seeing if prices will come down and they’re not wrong. Just this morning, Rapaport signaled another price drop.” Another trader echoed this sentiment, saying, “Sentiment is negative in the trade, and customers are not buying. ” Asked whether the hype surrounding synthetic diamonds is further weakening prices and sentiment, the people we spoke with unanimously said ‘no’. While they did not deny that the fashion market will be huge for synthetics, they also claimed it was not impacting their sales - particularly in the bigger sizes.

The question, however, is whether an overall improvement to the market is on the way. According to the traders we spoke with, there is little optimism on this front. Most suggested the lack of demand - particularly in China - will last at least until the Chinese New Year, while at least one viewed the situation more pessimistically. “This is going to last a long time. It is not a market correction,” he said, even predicting a “huge catastrophe” in the short term. “Long-term, however, this process will heal the industry. A big clean-up is coming. A reorganization. Whether a company is big or small is not the issue. Those with a plan will stay, and by ‘plan’ I mean not too many middlemen, having strategic partnerships with jewelers, a marketing plan, and so on. They will survive, the others will not.” We will just have to wait and see.