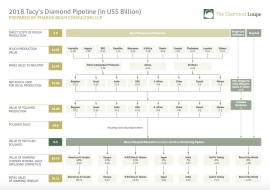 An annual tradition, industry veterans Chaim Even-Zohar and Pranay Narvekar present the 2018 iteration of The Tacy Diamond Pipeline, with an in-depth look at the impact that the rise and acceptance of laboratory-grown diamonds has had on the industry this past year. The Tacy Pipeline graph is available here, and the accompanying article, "The 2018 Diamond Pipeline: Faking the diamond dream", is available in full here. What follows is a highly abridged version.

In his inaugural statement after taking over as CEO of De Beers in 2016, Bruce Cleaver reflected, “We must never lose sight of the fact that for the entire diamond pipeline to succeed, every individual part of the diamond pipeline needs to succeed.” The rough traders and manufacturers have not lost sight of this message, but it seems the rough producers might have. The 2018 pipeline numbers belie a sense of stability, write authors Chaim Even-Zohar and Pranay Narvekar, while fundamental changes have emerged regarding the underlying assumptions on which the industry has relied. This is especially true when it comes to the legitimacy and acceptance of Lab-grown diamonds, or LGDs.

As we all know, De Beers entered the LGD market last year with its launch of Lightbox, a rude - if unsurprising - awakening for the entire industry. While the initial impact of the physical product was modest and its stated purpose was to differentiate LGDs as a separate product from natural diamonds, Lightbox did not have to sell a single stone to make its presence felt: “Amazingly,” the authors remark, “the announcement of LGD pricing some 80% below the competitors caused immediate price pressure on other lab-grown producers, who were forced to reduce selling prices before a single Lightbox stone was even available.” Eventually, the significantly lower-priced LGDs in small sizes had a domino effect on smaller natural diamonds as well – and these prices have gone on a downward trend ever since.

The authors note that as of 2018, we are now in the midst of the diamond pipeline evolving from having only one product to having two distinct products within the same pipeline. Both products will have areas which are independent and have their own defined market within the jewelry space, as well as in overlapping areas where the differentiation might not even be relevant. Rather than making an either/or choice, many companies might choose to be in both lines of business within the pipeline.

Natural diamonds will have their own dynamic driven by mine life, profitability, type of products and production, while LGDs, which are manufactured products, will eventually move to a cost-plus model for the rough. With LGDs, the mid-stream will add much more value as compared to natural diamonds. Again, companies could well work successfully in both pipelines, as long they to manage these different businesses.

In the case of the industry, eventually the only solution would be the acceptance of both the products in a common pipeline. For the time being, product differentiation seems the preferred strategy – and it seems to work. They are still seen as two totally different businesses, but to effectively cope with the future may require adapting to the new business realities. Except for natural diamond producers, all pipeline participants, from trader to manufacturer to retailer, only earn money on the products’ added value – the difference between buying and selling prices (minus costs). The supply of natural diamonds is, by nature, limited and deposits are exhausting. With lab-grown diamonds, the sky is the limit.

For these reasons, the authors suggest we are at the beginning of the ‘Fourth Diamond Rush’: the previous restraint in dealing with LGDs has been replaced by the fear of being left behind, with nearly everyone, from rough producers, polishers, traders, jewelry manufacturers, laboratories, trade associations to retailers considering their options. Investment (and risk) capital for ‘LGD exploration’ seems plentiful, sourced from within as well as outside the traditional pipeline, which we will take a look at now.

While rough producers face their own challenges, write Even-Zohar and Navekar, this still does not explain the level of difficulties currently being faced by the midstream, nor their general level of anxiety. Sightholders (or long-term contract holders) who buy from primary producers have always served as a steadying force in the midstream, “But they seem to be in a world of pain,” they write. “The average net margin for regularly supplied rough boxes from Alrosa and De Beers traded in the secondary market over a typical sight cycle of three years, is negative. This means that if a sightholder had purchased a rough box from the primary supplier in cash and accounted for all expenses and the terms provided while selling the box, the sightholder would have lost money.” This is not an isolated situation, but is rather the case for a majority of boxes which are being regularly supplied to the market.

“Effectively,” they write, “a sightholder would have been better off buying these boxes regularly on the market from rough dealers, instead of buying them directly from the producers. More worryingly, this is not a single blip, but a long-term trend.” It is not fair to blame this situation solely on the producers; they have shareholders to please and are happy to sell at a premium if there are takers at that price. “At the same time, it is undeniable that the short-term focus of profit optimization, squeezing customers, and causing protracted losses of pipeline profitability, may turn out to have become a classic case of killing the goose that lays the golden eggs. It will – if it has not already – backfire on the producers which have by and large lost the esteem and prestige which once gave them their stature.” Clients are no longer afraid to refuse a box of rough, as alternatives are available on the secondary market, even if the supply is not as consistent.

The result is: “What 2018 clearly demonstrated is that hitherto unseen shackles had broken, and midstream companies are seen trying to actively get into all segments the LGD business right from LGD production, polishing, trading, jewelry, retail and branding. If De Beers can be in both the natural and LGD pipeline, what is to stop the midstream companies from doing so? Nothing, absolutely nothing.”

In 2018, the pipeline saw diverging demand when it came to polished. The first half of the year saw strength as growth in China and a good season resulted in solid sales. However, as trade tensions kept ramping up and the dollar strengthened, diamond demand experienced a dip. The Lightbox announcement also forced retailers to take a careful look at their inventories, as they focused on the LGD threat to their own business. Excess supply of rough and pipeline destocking at retail further subdued polished demand, which was almost flat on a year on year basis. Considering the price drop, especially in cheaper goods, the pipeline will struggle to sell values in the current year.

While the natural industry faced a de-stocking issue, the LGD industry was faced with the reverse issue. As retailers started to increasingly experiment and carry LGD product lines, these needed to be first added to stock, leading to a stocking demand. This is quite similar to a jewelry program launch where there is an initial burst as retailers stock up ahead of sales. These are not actual sales to consumers. Companies that get carried away by either expanding capacity or offering excessive goods on memo risk overextending themselves.

From an overall pipeline perspective, however, the key to the current situation is held by the relationship between increased rough production and diamond demand. In 2017, rough diamond production hit a 10-year high at over 150 million carats, and is expected to stay near the 145m carat range until 2020. But while the supply  increased, there was no compensating increase in demand, which continued to remain muted in the absence of any concerted advertising efforts. This mismatch naturally resulted in a drop in the price of diamonds.

Demand supply constraints also apply to LGD producers, although in a different manner. Unlike a mine, where extraction costs increase and which are eventually depleted, a facility to produce LGD will continue to produce LGD diamonds, given adequate maintenance and upgrades. After the initial ‘sunk’ investment cost, it is economically better for companies to run their facilities and produce LGDs, as long as the revenues from the sale of the LGDs exceed the variable cost of running and maintaining the facility.

The other feature of LGD production is that they can be produced as per (market) demand, and are not determined by the characteristics of the mine, enabling growers to produce the desired mix. The issue of managing rough production that does not meet demand becomes less critical in the case of LGDs. While there might be some differentiation in times and formulas, the cost differential between producing a small diamond as against a large diamond is nowhere close to that of natural diamonds. Choosing the right technology becomes a more critical determinant factor.

All these factors were visible in how the scenario played out last year. The prices of small gem quality diamonds, produced indiscriminately by industrial diamond producing factories in China, crashed the price of these diamonds. Their prices eventually stabilized when LGD producers depleted their stocks and started producing LGDs only on demand. In the case of larger diamonds, currently produced primarily by the CVD method, demand continued to be healthy, while there was no deluge in supply. Naturally, these prices saw a less steep drop in prices as production gradually increased. As more production capacity is installed, these prices should continue to slide.

Eventually, being a manufactured product, its pricing would move to a cost-plus model, wherein rough is sold at an acceptable margin above the cost of production. The only way in which LGD producers can combat the same is through consolidation and moving to a production monopoly, just like De Beers achieved in natural diamonds. As for which product might eventually dominate the pipeline, we should again remember Bruce Cleaver’s sage advice: “We must never lose sight of the fact that for the entire diamond pipeline to succeed, every individual part of the diamond pipeline needs to succeed.” Somehow, the Diamond Dream must again become real – to all!