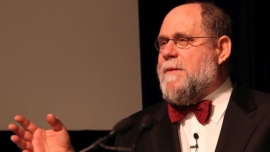 As announced last week, Rapaport's RapNet - the world’s largest diamond trading network - gave its members the opportunity to vote on whether it should provide diamond listing and pricing services for synthetic diamonds. The vote was the talk of the town at JCK Las Vegas show last week, where the results were revealed this past weekend, and the opinion of the trade was clear: voters came out overwhelmingly on the side of rejecting a trading platform or price list for synthetic diamonds: 79% compared to 21% voted against the RapNet trading platform listing synthetics on the site, while 74% rejected the idea of a synthetic price list and 88% wanted full disclosure of treatments to synthetic diamonds.

Consequently, RapNet will not provide a trading platform for synthetics or introduce a price list for the product. As Martin Rapaport confirmed. “We believe the current prices for synthetic diamonds are artificial, as they are based on misleading disclosure." During his presentation, he further outlined Rapaport's position, explaining that "Rapaport does not believe it is ethical to create markets or enabling environments for products that will hurt consumers and the millions of people in the natural diamond trade. We expect synthetic diamond prices to fall to levels that will destroy consumer confidence in diamonds."

Rapaport additionally called on the diamond trade to petition the FTC and demand the following disclosure statement be included on invoices for LGDs: "Prices for lab-grown diamonds may diverge significantly fro, natural diamond prices as they can be produced in unlimited quantities, whereas the supply of natural diamonds is limited by geological scarcity related to the size and quality of the diamonds." During his presentation, Martin Rapaport also outlined the harm synthetics do to the industry, focusing on three forms of consumer fraud: the mixing of synthetics with natural diamonds in jewelry; retailers pricing synthetics based on natural diamond prices without clarifying that the former will not retain their value, and; the ethical claims made by synthetic diamond sellers, while ignoring the benefits of natural diamonds to diamond-producing countries. Together, these factors will lead to long-term reputational harm to the industry, particularly when duped consumers find out the value of their expensive synthetic diamonds has plummeted.

Another issue on the ballot was whether members favor the establishment of a natural-diamond organization, with 85% voting in favor of the proposal. This issue was not supported by diamond organizations the World Federation of Diamond Bourses (WFDB) and the GJEPC. The WFDB wrote in a circular, "We appreciate the 'natural diamond organisation' initiative, but find it to be simply a source of confusion and which would not serve our members and the industry in any way. We believe that there are already too many diamond industry bodies and that we do not need another. Instead, we need all members of the trade globally to come together to work for its common good."