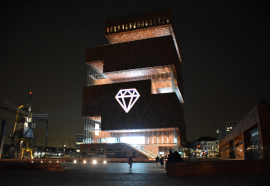 For the year to date, the volume of polished-diamond exports has fallen by 12%, while a 13% increase in the average price per carat to $2,648 from $2,339 compared to the same timeframe in 2018 has resulted in the overall value of polished exports staying level at $3.9 billion. The volume of polished-diamond imports during the first four months of the year is down 9%, but their overall value has increased by nearly 2% to $4.1 billion on a 12% rise in the average price per imported carat ($2,089).

Antwerp’s rough diamond trade in April mirrored the sluggish but gradually stabilizing performance of the rough market globally, recording a smaller year-on-year decline as compared to the previous three months. In April, Antwerp imported 7.1 million carats of rough diamonds - virtually the same as in March - representing a 19% decline from April 2018, while the average price of imported rough diamonds rose 3% to $116 per carat from $113 per carat in April last year. The value of rough-diamond imports fell by 17% compared to April last year; however, it increased by 11% compared to last month after increasing 20% in March, clearly indicating a recovery in the rough sector. The average price of rough imports to Antwerp has also risen steadily over the past three months, jumping from $89 per carat in February to $104 in March and $116 in April, which likely signals a slowdown in the quantity of smaller, cheap goods being traded. Rough-diamond exports for the month declined 13% in volume as well as value, as the average price per carat was unchanged from April 2018, and rose 3% over last month.