The Antwerp rough diamond trade had its best month of the year thus far, particularly in terms of value, though like much of the rough trade globally it is operating at much lower levels than in 2018. Exports of polished goods slowed in March while prices continue their steady climb above the record average prices achieved in 2018.

According to figures from the Antwerp World Diamond Centre (AWDC), Antwerp’s polished-diamond trade continues to see rising prices in 2019 following a year which the industry recorded its highest ever average price per carat for polished exports. The average price of polished exports rose by 9% in March to $2,776 per carat from $2,556 per carat in March of 2018. Polished imports also rose by 11% to $2,571 per carat, including high-value goods returning from the Hong Kong trade fair. Across the first quarter of 2019, the average price per polished carat exported has risen by 7% to $2,652 from $2,481 in Q1 2018, far outpacing the record of $2,392 per carat which set a new record last year.

Polished exports for the month were down 11% in volume and 4% in value at $1.05 billion compared to March of 2018. Polished imports for the month increased 2% in value to $1.5 billion, with the figures again skewed by goods returning from the Hong Kong trade fair. For the year to date, the volume of polished-diamond imports is down 5% while their value has increased 2% to $3.2 billion on an 8% rise in the average price per imported carat ($2,074). The volume of polished-diamond exports has fallen by 10% so far this year, resulting in a 4% decline in value at $3.06 billion.

Looking at the rough trade, in March Antwerp imported 7.1 million carats of rough diamonds, a 2% volume increase over February, while the average price of imported rough surged by 17% to $104 per carat from $89 per carat last month. This led to a 20% increase over February in the value of imported rough. Compared to March 2018, however, the volume of imports fell by 30% while their value was down 36% at $744 million from $1.2 billion a year ago. The volume of rough diamond exports was down about 5% compared with last month while their value increased by 8% on a 13% rise in the average price per carat. On an annual basis, the volume of rough exports fell by 27% while their value was down 38% at $922 million from a strong comparison point of $1.5 billion in March last year.

For the year to date, the volume of rough imports is down 24% at 20 million carats from 26 million carats a year ago, while the value of those goods has declined 33% to $2.1 billion from $3.1 billion a year ago. This import trend is one that originates in the mining sector, with major supplier Alrosa recording a 38% decline in sales in Q1 and De Beers ending the quarter down 11% from 2018 levels despite a strong rebound in March. Rumors are circulating in the diamond capital about a shortage of rough supply, which indicates that demand from the manufacturers is on the rise again, and suggests that imports may rise in Q2. Rough diamond exports in Q1 have fallen by 18% in volume to 27 million carats from 33 million carats last year, with the value of those goods declining by 28% to $2.5 billion. Significantly, the average price per carat for exports as well as imports has fallen by 12% for the year thus far, which may spell relief for manufacturers. 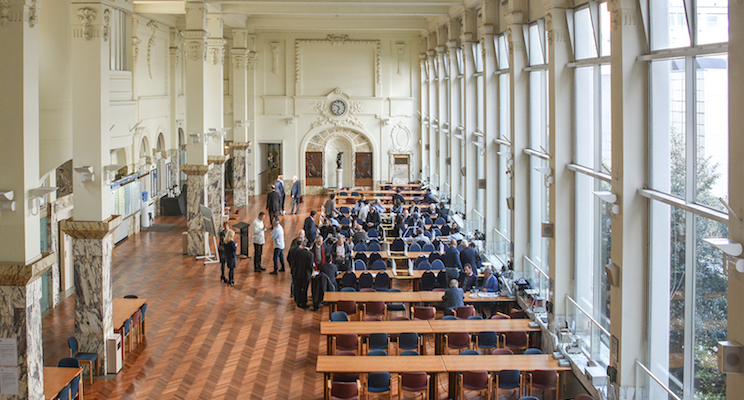