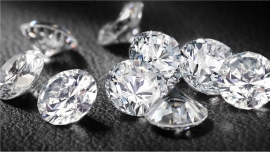 Rapaport identifies several developments that have led jewelers to be very cautious about replacing their inventory and avoiding large purchases, including general uncertainty after a "disappointing holiday season" as well as new trends in the retail landscape: greater customization, memo sales and omni-channel marketing, all of which means less need for in-store stocks of goods. "The market remains saturated with diamonds below 0.50 carats and lower-quality goods, putting pressure on prices," they write. "The number of diamonds listed on RapNet as of April 1 was 1.53 million, up 5% since the beginning of the year and 23% higher than a year ago. Dealers are selling old stock, since a decline in manufacturing has meant few new goods are coming onto the market."

As a knock-on effect, Rapaport estimates that rough diamond sales have fallen by as much as 30% in the first quarter, with less manufacturing activity taking place. "De Beers and Alrosa reduced supply to support prices", they write, but manufacturers need those prices to fall in order to retain profitablity. For the first two months of the year, Alrosa's rough sales were down 40% from 2018, falling to $618.8 million from $1.032 billion last year, while De Beer' combined sales for the first two sights of the year fell by 20% compared to 2018. Sales from the third cycle have not been released as of this writing. According to Rapaport, "To make the rough market demand-driven again and bring profitability back to the manufacturing sector, rough prices must come down by at least 10%." Until they do, or until polished demand picks up, supply and demand will likely remain out of balance.