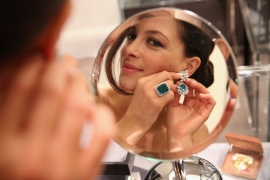 Russian diamond mining giant ALROSA teamed up with GfK (Growth from Knowledge), consumer research company, to examine the purchasing trends among diamond consumers. The US is the world’s largest consumer market of diamond jewelry, and China is the most rapidly growing market, and the study shows why. The research was conducted in the autumn of 2017, surveying more than four thousand people from the US and China who had bought or received diamond jewelry as a gift within the last 12 months, and targeting men and women aged 25 to 55 years with average or above average income. Perhaps the most remarkable finding is that almost 73% of respondents in China and 71% in the US replied that they bought diamond jewelry for themselves. In less than 30% of instances, in both markets, was diamond jewelry was purchased as a gift.

Of those 30% gift purchases, around 60% of the time it was for a husband or wife. In the US, diamond jewelry gifts were given to parents (14%) and friends (12%) more often than in China. Most often, gifts with diamonds are given to people aged 26 to 45 years – they account for 71% of gifts in China and 57% in the US. People over the age of 46 are more likely to receive diamond jewelry as a gift in the US (25%), while this age group accounts for just 16% of gifts received in China. Americans also tend to give diamonds as gifts to teenagers more often than in China – the share of gifts to children aged 11 to 17 years in the US is 4%, while it was only 1% in China. The study also found that diamonds are given to women more often than to men – accounting for approximately 94% of the cases in China and 87% in the USA.

Another finding that should be pleasing to the diamond trade is that 86% of the Chinese diamond consumers surveyed are planning on making another purchase in the coming year, while a solid 59% of Americans surveyed said they are also planning a purchase in the next 12 months. It is suggested, however, that the figure in China might be higher because Chinese consumers tend to plan their purchases ahead of time, while the US consumers tend to make diamond purchases more spontaneuously. Furthermore, the study shows that not only are diamond jewelry buyers loyal consumers who think a diamond is a good acquisition for themselves, but are also ready to share this opinion with their friends. According to the research, about 34% of respondents in China and 37% of those interviewed in the US say if their friends sought their advice on a present to a loved one, they would recommend diamond jewelry as a gift.