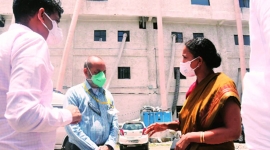 With more than 150 new positive tests among diamond workers in Surat, India's polishing hub, local communities and industry organizations have instated new restrictions, including an 8-day closure of each manufacturing sub-unit if one person, full closure if more than two persons test positive. Already more than 25 units have been close and cafetaria's are not allowed to open.

The Indian Express reported earlier this week that three major diamond firms in the Katargam zone, Dharmanandan Diamonds, Shivam Exports and J&B Brothers were forced to close by the Surat Municipal Corporation after more than 20 employees at the factories tested positive. The factories will be forced to remain closed for ten days, until further notice, the Deputy Health Commissioner told the newspaper.

According to insiders, the diamond manufacturing industry in Surat is currently operating at 50% capacity. According to Business Standard, industry organizations are also contemplating to continue the temporary, voluntary stop of rough imports, which was set out to end at the end of June, claiming inventory levels are still high and decreased financing and overdue payments are constraints to lift the moratorium.