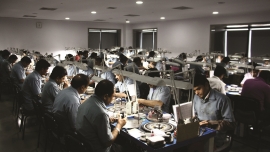 Local authorities have ordered the partial closure of about eight diamond-cutting firms in Surat after 23 workers tested positive for COVID-19. Several of their staff members will also undergo a 14-day quarantine, as will the families of those confirmed to be infected.

The Surat Municipal Corporation (SMC) said it has ordered the closure and disinfecting of certain floors and departments of these eight diamond units. With the detection of several positive cases, certain departments of diamond units, including Shivam Jewellers, SRK Empire, Dharmnandan Diamonds, Rinkle Impex, C Dinesh and Co, JB and Brothers, and Royal Diamonds, have been shut, the SMC said in a statement. While it has been reported that the companies impacted were following social-distancing regulations, the SMC reportedly penalized three other polishing units for violating Covid-19 guidelines.

Diamond polishing units started their operations again from in May after the lockdown was relaxed in the country, but were only operating at half-speed, with 50% of workers in factories and 33% of staff allowed in offices. It is expected to take at least 2-3 months for the industry to get its operations back to normal.