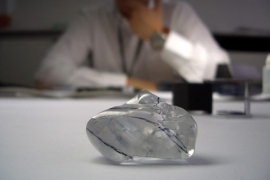 Safdico International (South African Diamond Corp.), a subsidiary of Graff Diamonds and a leading diamond manufacturing and trading company has signed a deal with Australian miner Lucapa whereby it may purchase up to 60% of the annual rough production from the Lulo alluvial mine in Angola.

The deal was made possible by changes to Angola's diamond policy implemented last year, which enables diamond miners to sell up to 60% of their production on the international market. Previously, all diamonds mined in the country had to be sold to state firm Sodiam, which then sold them on to select buyers. "This new Lulo revenue stream represents another key milestone for Lucapa’s value-adding strategy," the company said.

Under the agreement, the Lulo diamonds purchased by Safdico are placed into the cutting & polishing partnership. After procurement and manufacturing costs are deducted, the profits generated on the open market from the sale of the resultant polished diamonds will be shared equally between Lulo alluvial mining company Sociedade Mineira Do Lulo (SML) and Safdico. To date, Safdico has purchased approximately 4,900 carats of run of mine rough diamonds from SML under this commercial partnership. SML is due its first share of the partnership profits from Safdico this quarter (Q1 2020).

Lucapa managing director Stephen Wetherall told The Diamond Loupe in a 2018 interview that the miner would be looking to partner with high-end diamantaires to polish some of the exceptional diamonds frequently recovered at its Lulo mine in Angola and Mothae mine in Lesotho. "This strategy was implemented to maximise the rough value of our diamond production ... and to access additional revenue streams for Lucapa and our mining partners into the future,” he told us. Earlier in January the miner announced the exceptional result from its first foray into a cutting & polishing partnership: a 36.20-carat rough diamond from the Mothae kimberlite mine in Lesotho was polished in Antwerp in partnership with a leading international diamantaire, yielding six D-color diamonds, the largest of which is an exceptional 8.88-carat D-Flawless pear-shaped diamond.

Lucapa/SML has completed a self-funded $12 million capital investment program designed to expand total group production to >60,000 carats in 2020. This production increase, coupled with the new revenue streams generated from the cutting & polishing agreement with Safdico, will enable SML to generate higher returns for its partners and make more regular loan repayments to Lucapa, the company said. The Lulo mine has produced 14 +100 carat diamonds to date and is one of the highest average US$ per carat alluvial diamond producers in the world.

Safdico, a De Beers sightholder, entered into a partnership with Laurence Graff in 1999, and together they have acquired and polished some ot the world's most famous diamonds, including the 1,109-carat Lesedi La Rona, 603-carat Lesotho Promise and the 493-carat Letseng Legacy. It has fashioned The Venus - a 118.78 Carat D Flawless Heart Shape diamond  -"The largest, most perfect heart shape diamond ever created," from a 357-carat rough diamond unearthed in the mountains of Lesotho, and The Graff Constellation, the world’s largest D-color Internally Flawless diamond, which is the first round-shaped diamond to surpass the coveted 100 carat mark, weighing in at 102.79 carats.