Alrosa Board Green-Lights Acquisition of Kristall 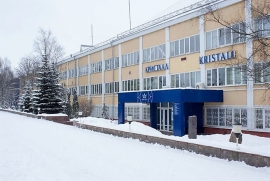 As has been anticipated for some time now, the Supervisory Board of Russian diamond miner Alrosa has green-lighted the acquisiion of a 100% stake of Production Corporation 'Kristall' from the Russian Federation. The move brings the leading polished-diamond manufacturer in Russia and Europe under the Alrosa Group umbrella. The value of the 100% equity interest in Kristall was determined on the basis of an independent appraiser's report at RUB 1,886 million, approximately US$29 million. Alrosa will put together an action plan to operate and develop Kristall as part of Alrosa Group and present it to the Supervisory Board by the end of the year.

“Despite the fact that Alrosa is currently a key supplier of rough diamonds to Kristall, it accounts for as little as 0.5% of Alrosa’s total sales of rough diamonds," says Alexey Philippovskiy, Deputy CEO of Alrosa. "The deal value is less than 1% of Alrosa’s net assets and, according to our estimates, the purchase price will not exceed Kristall’s net assets at the date of the transaction. The sale and purchase agreement is expected to be signed by the end of September, with the deal to be closed in the first half of October. After that, we will start developing a plan to integrate Kristall into Alrosa Group.”

The Kristall diamond factory was founded in Smolensk in 1963 and is 100% owned by the state. Currently Kristall is the leading polished diamonds manufacturer in Russia and Europe, processing over 200,000 carats of rough diamonds per year, with 90% of those diamonds supplied by Alrosa. Kristall’s international operations are run through its trade offices in the US, Hong Kong, and Belgium. Kristall employs more than 1,800 people. In 2018, Kristall production and sales were 105,700 and 111,700 carats of polished diamonds, respectively. Its total revenue amounted to RUB 12.8 billion (approx. $200 million), and net profit reached RUB 40.7 million (approx. $632,000). In 2002, Kristall started producing its own jewelry. Smolensk Diamonds, its jewelry entity, now has over 50 sales points in 30 Russian cities. Kristall’s another entity, Almaz Servis, produces tooling and equipment for the diamond industry. Alrosa has two cutting assets: a branch of Alrosa Diamonds in Moscow, specializing in large-size and unique polished diamonds, and a facility in Barnaul, which processes small-sized diamonds of 2–6 grainers. In 2018, Alrosa’s sales of its own polished diamonds exceeded USD 95 million.