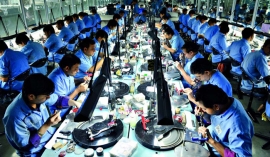 The ongoing slump in the global diamond industry is having a negative impact on jobs in the expansive diamond manufacturing industry of India. The world's largest cutting and polishing centre appears to be heading toward an employment crisis, at least in the short-term. Estimates from industry insiders are that the diamond industry in Gujarat have seen job losses of up to 10%-15% already, with more on the way if consumer demand does not pick up in the near future.

The Gujarat Diamond Workers’ Union (GDWU) has stated that more than 250 diamond units in Surat and other diamond cutting and polishing centres across Gujarat have closed this year, according to the Times of India (TOI), leading to as many as 40,000 job losses. The GDWU is reportedly asking for financial assistance to the workers that have been made redundant. The vice-president of GDWU, Bhavesh Tank, told TOI that "The situation of the diamond workers is going to be worse after the Diwali vacation" (Diwali is on Oct. 27, with manufacturing units typically closing for a month). "The majority of units have decreased production by almost 70%" and he fears that many of the small and medium manufacturers will not reopen after the holiday.

India's cut and polished diamond exports declined by more than 18% year-on-year in July, and for the fiscal year to date (April-July 2019), polished diamond exports have tumbled 17.5% to $6.70 billion as against the $8.13 billion exported over the same months last year, and are down 14% from January-July. For the calendar year to date, rough imports have declined by 26%, the lowest level since 2015, as manufacturers have been cautious about buying more rough to polish with so much polished already in the system. A De Beers sightholder told the TOI, "Surat's industry is sitting on a huge stockpile of polished diamonds, which are waiting to be cleared. In such a situation, there is no need to process new stones as the demand is subdued. The first casualty would be the workers."

Additionally, the prices of polished diamonds have dropped 6%-10% in the past four months due to weak demand and the industry does not foresee demand picking up soon, though Babu Gujarati, president of the Surat Diamond Association, told TOI that a "positive atmosphere" is returning, adding "we feel that the slowdown period will end soon." Colin Shah, the Vice-Chairman of the Gem & Jewellery Export Promotion Council (GJEPC), said that “A slowdown in global demand, coupled with liquidity crisis, has affected the trade. Though demand in the US and Europe is steady, demand has dropped by 15-20 percent in China, which is a major market.”