Botswana To Polish Zimbabwe Diamonds After All (?) 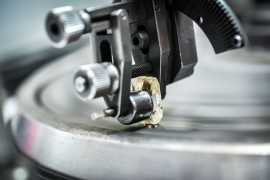 Media reports out of Africa are claiming an agreement (MoU) has been reached between the Zimbabwe Consolidated Diamond Company (ZCDC) and the Diamond Trading Company (DTC) in Gaborone, whereby the latter would commence processing of Zimbabwe's diamonds. The diamond deal is said to be one of the agreements sealed during the high-level Zimbabwe-Botswana Bi-National Commission (BNC) summit held in Harare last week.

According to Zimbabwean newspaper The Sunday Mail, implementation of the deal will start immediately, with diamond experts from DTC - which is regarded as the one of the most advanced diamond sorting and valuing hubs - expected in the country this month. Through the bilateral arrangement, Zimbabwe will ship its diamonds to Botswana for processing, cleaning and polishing before they are placed on the market. One should bear in mind, however, that we have heard this story before, and it did not come to fruition. And indeed, statements coming out of the meeting left some doubt whether Botswana will be offering training or doing the polishing themselves.

Botswana’s Minister of Mineral Resources, Green Technology and Energy Security Eric Molale told The Sunday Mail that the country had agreed to offer its full expertise in the diamond sector. “We have set up a technical team that will be coming here this month to determine the scope of the work that has to be done in that area. We believe that at the end, it will be a win-win situation ... We need to help them to meet the standards of our trading centre, so the important thing is that they should learn first from our centre,” said Minister Molale. “Secondly, we want to train them in the whole value chain of diamond mining, valuing, processing, jewellery manufacturing and so forth. So there is a lot of work to be done, but I think we are at the tail-end of it. We will have an implementation plan starting in March.”

During his visit to Botswana last year, President Mnangagwa said Zimbabwe was prepared to learn strategies for developing its diamond industry. “In Zimbabwe, yes, we have diamonds, but we do not really have a diamond policy. We are now crafting the policy, discussing with Botswana, Namibia and Angola to assist us in formulating a diamond policy for Zimbabwe. Currently, there is discussion between my Minister of Mines and Botswana’s Minister of Mines so that we bring our diamonds from Zimbabwe to be processed here,” he said at the time, though no agreement came out of the discussion. Experts believe that Zimbabwe’s diamonds can fetch considerably higher prices when they are competently processed. It should also be noted that only last week, Botswana's president dismissed a report that the country had offered Zimbabwe a $600 million diamond-backed loan and said his government had only offered to guarantee a $100 million private credit line for Botswana companies to invest in their troubled neighbour.