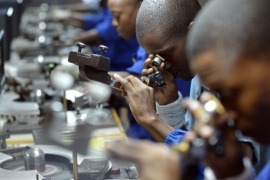 A hub dedicated to the diamond industry in Angola will be inaugurated in 2019 in Saurimo, Lunda Sul province, the minister of Mineral Resources and Oil announced at the end of December. Diamantino Azevedo said that setting up the hub, a project developed jointly by state diamond mining and processing company Endiama and state diamond sales company Sodiam, is in its final phase. The minister also said that the hub project includes a diamond cutting and polishing factory, a professional technical school and other institutions and industries linked to the diamond business.

The minister, who was speaking at an end-of-year greeting ceremony, explained the restructuring carried out in the sector, adding that the Ministry wants more companies to invest in diamond prospecting and mining, according to the Angop news agency. Sodiam’s chief executive, Neves Silva, said last week that the diamond cutting and polishing plant, which will begin work in August 2019, has a cost currently estimated at US$10 million and will be the unit with the highest installed capacity in Angola. Angola currently has only one diamond polishing plant, Angola Polishing Diamonds, located in the municipality of Belas (Talatona), in Luanda, with a production capacity of 5,000 carats of diamonds per month.

Likewise, Zimbabwe media outlets recently announced that a company from Botswana, Hangana Private Limited, plans to establish a diamond cutting and polishing centre in Bulawayo as part of its long-term investment in Zimbabwe, and has signed an MoU with its local partners to get it off the ground. Hangana legal representative Lewis Maunze, a resident in Zimbabwe, told The Chronicle, Hangana legal representative Mr Lewis Maunze who is resident in Zimbabwe said: “We are looking at setting up a diamond cutting and polishing centre in Bulawayo in the long term as we roll out our projects in different sectors. The advantage is that our partners are from Botswana, a country that is doing exceptionally well in the diamond industry. In that regard, if the diamond cutting and polishing centre is set up, we are guaranteed enough expertise, skills and experience in the diamond industry.” While he did not specify a timeframe for the proposed investment, he indicated that his group was ready to tap into Zimbabwe’s diamond sector. "When we came here for our first meeting recently, we found out that there is an opportunity for polishing and that's why we want to go into that because so far Zimbabwe has got the diamonds but they don't have a polishing plant,’’ he added.