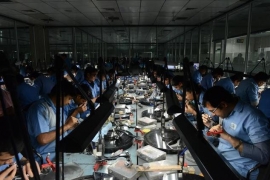 Nearly one in five people engaged in India’s diamond industry, or about 100,000 workers, are said to be at risk of losing their jobs in the next six months, a representative of the Gem & Jewellery Export Promotion Council (GJEPC) told The Economic Times. “The diamond trade in Surat could potentially lose one lakh (100,000) jobs in the next two quarters due to the increase in duty, lack of ease of doing business and the liquidity crunch. A lot of diamonds which used to come to India for recutting are now being shipped to China and Thailand,” said Colin Shah, vice-chairman of GJEPC.

On September 26, the Indian government increased the import duty on cut and polished diamonds to 7.5% from 5% as part of its move to increase import duty on non-essential items to narrow down the current account deficit (CAD). The increase in import duty on cut and polished diamonds has led to the business of recutting and redesigning shifting to competitors such as China and Thailand. “There is no respite from the liquidity crunch as collateral norms and rating norms have become harder. The ease of doing business, compared to our competing centres, is simply not there,” said Shah. He said that imports of polished goods have fallen by 32% in the first six months of this financial year (April - Sept. 2018). "The devaluation of the rupee has added to a further reduction in finance in dollars, adding to the crunch. The cutting and polishing units at Surat have already advanced their Diwali break by a fortnight to maintain profitability,” he said. Diamond sales in the domestic market have also fallen, according to the industry body.