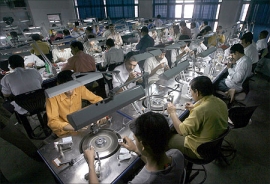 The majority of small and medium diamond manufacturing units in India are planning to close shop and take an early Diwali vacation as sentiment in the diamond cutting and manufacturing centre is faltering, writes the Times of India. Depreciation of the Indian rupee has put heavy pressure on the trading of polished diamonds amid dwindling demand, falling polished prices, firm rough diamond prices and the banks squeezing loans to the industry.

Surat Diamond Association (SDA) president Babu Gujarati told TOI, “The situation in diamond industry is grim, especially in the small and medium segment. Most of the units are observing two to three days holiday in a week to cut down on production. It is believed that many small units will start shutting early in the last week of October.” The diamond industry has officially announced 21 days of Diwali vacation starting from November 4, but polishing units might start their holidays as early as October 25, shutting their units for over a month. Most small diamond units have been manufacturing tiny gems, including stars and melee, the TOI writes. The international price of stars and melees used in jewelry and watches is weak and prices have softened due to rupee depreciation impacting demand. The threat of undisclosed synthetics is also causing jewelers to avoid melee inventory in foreign countries including the US, Hong Kong and China.

The recently concluded second edition of Bharat Diamond Week in Mumbai organized by the Bharat Diamond Bourse (BDB) had fewer international buyers and the demand for diamonds was weak. Small diamond unit owner Chandu Sheta said, “The charm of diamond business has gone forever. We are forced to sell the diamonds at discounted prices to realize our investment." Diamond industry analyst Aniruddha Lidbide commented, “The diamond business has been eclipsed by various factors, one of the major one is the rupee depreciation and decrease in the prices of polished diamonds by almost 6 per cent in the last one year. Small unit owners are the biggest losers.”