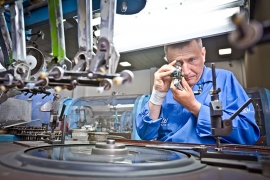 The world's leading diamond producer, Russian diamond miner ALROSA, has let it be known that it is considering the purchase of Russia's largest diamond manufacturer, Kristall Smolensk, to "support the country’s gem-cutting industry and help create a stronger competitor to global group De Beers", Reuters reports. The supervisory board of Russian diamond mining giant ALROSA approved acquisition of 100% of Kristall, the company said in a statement on Friday. ALROSA’s chief executive Sergei Ivanov has been asked to submit technical specifications for estimating the target’s price and so make an offer. The miner said it was “expedient” for it to buy Kristall when the state-owned company is privatized, which is expected by 2019.

ALROSA commented to The Diamond Loupe, "We have a good business selling rough. We are now discussing plans to integrate Kristall Smolensk, the leading polished diamond manufacturer in Russia, which specializes in premium stones. But even if we integrated them, they could polish about 2-3% of our rough production. That does not mean we would switch to polishing. It is not part of our strategy." ALROSA already has a cutting business, but it only made $96.9 million of revenue in 2017, and ALROSA made it clear to us that it is not about to change it focus on mining. Meanwhile, Kristall manufactures around 300,000 carats a year and generates revenue of around $200 million. Kristall and other Russian cutters currently buy stones from ALROSA at similar terms than overseas companies, but they are struggling to compete with much larger polishing centres like in India. Reuters notes that Russia’s gem-cutting industry is struggling to survive amid increased competition from foreign polishers, after Moscow scrapped a 6.5 percent export duty on rough diamonds in 2016.

Kristall, based in Smolensk, celebrated its 55-year anniversary on March 1, 2018. The factory, which opened in 1963, was the first in the domestic industry to start cutting diamonds. In a challenging environment where the elimination of the 6.5% export duty opened the market, leading to sharp escalation of competition, particularly from Indian buyers, Kristall manages to maintain the highest quality of work and thereby maintain its position in a highly competitive market. Smolensk’s company is one of the few in the world that manufactures "Triple Excellent" diamonds on a mass scale. CEO of Kristall, Maxim Shkadov, speaking with Rough & Polished, mentioned the decrees issued by the President of the Russian Federation, which point to the need of creating new jobs in the country, and said that natural resources should be processed within the country and it is in this area where new jobs can be created. ALROSA’s CEO Sergei Ivanov, who visited Kristall last November, told the Kommersant business daily earlier this year the company should support Kristall as “it has 1,600 jobs and produces a high quality product.”