Princess Beatrice the Latest Royal Millennial to Get a Diamond Ring 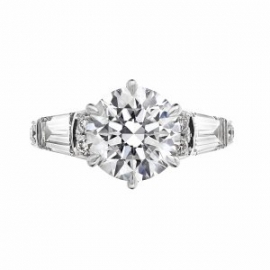 "I worked with Edo closely for the past four to five months," Leane said in an interview. "He wanted the fusion of two elements in one ring, his love of Art Deco and Princess Beatrice’s love of Victorian style, so it’s a mix of both aesthetics." The ring consists of a 2.5-carat round-cut diamond at the center, flanked by smaller round brilliants and two tapered baguette-cut diamonds totaling 0.75 carats. The diamond-studded band is made of platinum, and has been designed in Leane’s signature style. The ring is valued at an estimated price of £60,000 (roughly $74,000).

Leane said he sourced the stones himself, ensuring they were ethically sourced from Botswana, while the ring was made by the finest goldsmith at his London workshop. “We documented the process every day, starting with the melting of the platinum, and we sent pictures to Edo every other day,” he said, adding that he’ll also be designing the couple’s wedding bands. The designer is one of Great Britain’s most celebrated contemporary jewelry talents. Leane got his starting training at the bench in London’s Hatton Garden jewelry district.