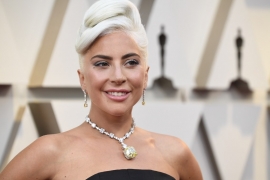 At the 2019 Oscars, Lady Gaga wore a necklace featuring a 128.54-carat, 141-year old "Tiffany diamond", dubbed "one of the largest yellow diamonds in the world." It is reportedly worth over $30 million. Audrey Hepburn was the last lady to wear the incredibile, yellow, cushion-cut diamond it back in 1962 for publicity posters for Breakfast At Tiffany's. Last night marks only the third time in history that the Tiffany diamond was worn in public; before Hepburn's spin, the diamond was first worn by Mrs. Sheldon Whitehouse at the 1957 Tiffany Ball held in Newport, Rhode Island.

The yellow diamond was first discovered in South Africa in 1877 and acquired by Charles Lewis Tiffany a year later for $18,000. From there, the stone was brought to the jewelry house's chief gemologist who supervised as the stone was cut into a cushion-cut with 82 facets (a typical cut has 57). Since then, the diamond has traveled the world at various jewelry fairs and museum exhibitions.

Lady Gaga has been showing off some incredible pieces this awards season. It started with the extraordinary Chopard diamond earrings she wore for the film’s premiere at the Toronto International Film Festival in September; part of the Queen of Kalahari suite of jewelry, they featured a 25-carat pear-cut diamond and a 26-carat heart-shape diamond, just two of the 23 stones cut from the same 342-carat rough diamond. There was the suite of Tiffany & Co diamonds she wore to the Golden Globes, weighing more than 100 carats in total, including a necklace featuring over 300 diamonds, including one 20-carat pear-shaped diamond at the center of the opulent piece.