Diamonds Light Up The Globes 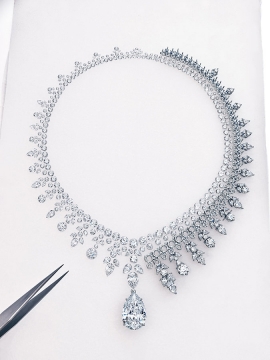 The parade of stars at the 2019 Golden Globe Awards dazzled a global audience with some astounding diamond jewels. Statement necklaces stole the show, with stunning earrings, stacks of bejeweled bangles, emeralds, rubies and other colored gemstones shining in their supporting role. Lady Gaga may not have won the award for Best Performance by an Actress in a Motion Picture - Drama (which went to Glenn Close), but she clearly took home the award for the most memorable jewerly moment on the red carpet, wearing a custom-made Tiffany & Co necklace featuring  300 diamonds weighing 100 carats and including a 20-carat pear-shaped diamond at the heart of the piece. The necklace, called the called the Tiffany Aurora, is worth a cool $5 million (Gaga also won the Best Original Song category for her track "Shallow" from A Star Is Born.

“The necklace was crafted especially for Lady Gaga and carefully made by hand from beginning to end in the Tiffany Workshop," Melvyn Kirtley, Chief Gemologist of Tiffany & Co. told InStyle.com. "Our design approach was to create a piece that was both intricate and modern in its boldness, something that flowed beautifully on the neck - a signature of Tiffany craftsmanship.” Referring to the incredible sky-blue Valentino couture gown she wore for the occasion, Lady Gaga's stylists, Sandra Amador and Tom Eerebout said, “The Tiffany Aurora necklace, specially crafted for Lady Gaga and today’s Globes, captures the majestic nature of her dress perfectly. Because this is such a special moment - her first major award show of the season - we wanted the jewellery and dress to complement each other. What could be more fitting than this exquisite custom piece, named after the goddess of dawn and a cluster of stars, to mark Lady Gaga's wonderful work in A Star is Born?" Tiffany chief artistic officer Reed Krakoff described Gaga as a "visionary artist who truly exemplifies creativity and iconic style."