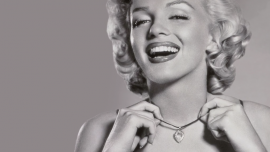 Christie’s in Hong Kong will auction on 27 November the 24.04-carat pear-shaped, Fancy Yellow Moon of Baroda diamond Marilyn Monroe wore to promote the release of the Howard Hawk’s 1953 film, Gentlemen Prefer Blondes. It could be value anywhere from $500,000 to $750,000, perhaps more. Christie’s will also auction an autographed photo of the actress wearing the stone. The picture has a presale valuation of $10,000 to $15,000.

The Moon of Boroda had a long history prior to finding its way to Marilyn and eventually to Antwerp. The Gemological Institute of America has recently determined that this historic diamond was mined in the legendary Golconda mines of India, which are renowned for having produced the best quality diamonds. According to Jordan Riefe for Hollywood Reporter, while the stone’s early history is vague to nonexistent, it is believed that it was among the vast collection of the Gaekwads of Baroda, princes of one of India’s most ancient and powerful ruling families. It was later gifted to Maria Theresa of Austria, the Habsburg Dynasty’s only female monarch, but was returned to the Gaekwads after her death in 1780. In 1860, it was fitted to a necklace and later sold to an unknown buyer, eventually landing in the collection of Prince Ramachandra, who brought it to the U.S. in 1926 and later exhibited it in L.A. during the Easter Fashion Festival of 1942.

According to the 3 July 1953 edition of the Cleveland News, the Moon of Baroda was acquired in 1944 by Samuel H. Deutsch, the president of a distinguished firm of diamond cutters in Cleveland, Ohio. He sold it in 1953 to Meyer Rosenbaum, president of Meyer Jewelry Company in Detroit, Michigan, the same year this extraordinary coloured diamond came to be associated with Marilyn Monroe. In September 1966, the Moon of Baroda was described by another American newspaper as representing, "one of the most brilliant examples of diamond cutting in diamond history. It is canary yellow and very clean, and its pear-shaped design is well adapted for royal headgear of Indian nobility." In 1990, the diamond was offered at Christie’s in New York, realising $297,000 — nearly tripling its low estimate. Eighteen years later, in 2008, it was seen in public for the first time in years when it was shown at the Diamond Divas exhibition in Antwerp.

“It wasn’t until recently that we got introduced to the owner of the stone,” Christie’s Asia’s Connie Luk told The Hollywood Reporter about how the auction house convinced the anonymous owner to sell. “We paid him a visit almost every year to ask him if he’s interested in selling, and we were quite persistent. And finally, this year he said yes to us.” The current owner estimates its value between $500,000 and $750,000. “It’s really hard to give an estimate to such a legendary and historical stone. We give the estimate based on the market price of a 24-carat yellow diamond. We believe that the historical value will add to the price,” says Luk.