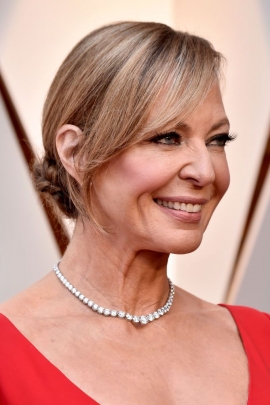 At the annual pinnacle of high-end celebrity jewelry and fashion, Oscars night, the bling on the red carpet did not disappoint. High-end jewelry reporter Anthony DeMarco covered the glamorous event for Forbes magazine, noting that diamonds and white metals were the overwhelming favorite among the stars. The other major trend on the Oscars red carpet, he writes, was sparkling drop earrings, particularly pear shaped gems or filigree designs. Necklaces were not as prevalent as in past years but those that did appear were sparkling diamond statements. Chopard jewels adorned the most stars on the red carpet while De Beers Forevermark and Harry Winston diamonds had the most sparkle. Bulgari, Tiffany & Co., Fred Leighton and Piaget also made some stunning appearances.

Best Supporting Actress nominee, Allison Janney (pictured), wore more than 125 carats of Forevermark diamonds, including a Forevermark by Rahaminov Diamond Riviera Necklace set in platinum (55.26 carats). Nicole Kidman, a presenter at the 90th Annual Academy Awards, was adorned in more than 84 carats of Harry Winston diamonds, while Helen Mirren wore more than $3.8 million worth of Harry Winston sapphires and diamonds. The world’s best jewelers now take it for granted that draping an A-list actress in diamonds is essential for an event such as the Oscars, but it is not only about the glamour. The Academy Awards red carpet is also a major marketing platform for jewelers as well as fashion designers, publicists, stylists and studio executives.