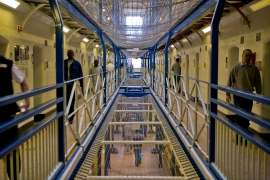 Fugitive diamond merchant Nirav Modi was denied bail for the third time by a UK court in his extradition case to India to face charges in the $2 billion Punjab National Bank fraud & money laundering case. He will continue to be lodged in a Wandsworth prison in south-west London, which his lawyers described as "unliveable". His bail had already been rejected twice before by Westminster Magistrates' Court in London, at least in part because of Modi's "lack of community ties" in the UK, having been based in London for only a "short period of time" since 2017. While the offer by Modi's lawyer to double his security to 2 million pounds did constitute a change in circumstances required for the judge to hear the "renewed" bail plea, she still had similar concerns as before that he would fail to surrender before the court.

"This is a large fraud and the doubling of security to 2 million pounds is not sufficient to cover a combination of concerns that he would fail to surrender (if bail is granted)," said Judge Arbuthnot. Modi's barrister Clare Montgomery countered, saying, "His experience in custody has been vivid and damaging... he is willing to abide by any bail conditions imposed by the court because Wandsworth is unliveable and makes the effective preparation of his case virtually impossible." She argued that her client sees the UK as a "safe haven" and has chosen not to flee to any other country with which India does not have an extradition treaty, but her attempts to persuade the judge to grant bail on a strict 24-hour curfew at his posh Centrepoint apartment in the West End of London were unsuccessful.

Modi was arrested by Scotland Yard officers in central London on March 19. During subsequent hearings, the court was told that Nirav Modi was the "principal beneficiary" of the fraudulent issuance of letters of undertaking (LoUs) as part of a conspiracy to defraud PNB and then laundering the proceeds of crime.