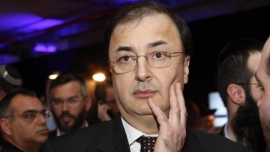 Several media reports from Israel indicate that Israeli law enforcement officials say they want to question Lev Leviev, the business baron whose companies allegedly are at the center of a vast diamond-smuggling ring that has operated for years, according to Israeli daily Haaretz. Six suspects were arrested Monday as part of a probe into suspected diamod smuggling by Israeli tycoon Lev Leviev. There names were made known Tueday, November 6: Two of the suspects are Leviev's relatives, including his brother, Moshe Leviev, and his son Zvulun Leviev, who ran a factory that Lev Leviev owned. The three others detained are former and current employees, including Asher Yechieli, who was the former manager of Leviev's plant in Russia. Yehuda Asor, the sixth suspect, is accused of serving as a courier and smuggling diamonds into Israel. A source close to the Uzbekistan-born Leviev said he might return to Israel voluntarily for questioning.

A police spokeman said the investigation began at the end of March 2018, with the ring suspected of smuggling as much as $81 million (300 million shekels). The Leviev Diamond Company responded in a statement: “Mr. Leviev and the companies under his control are acting in accordance with the proper norms, while adhering to the law, and we hope that the matter will soon be clarified and the suspicions proved baseless.” The judge ordering the suspect's detention wrote, "The suspicion is that hundreds of millions of shekels have been smuggled into Israel over many years, and that I have found documents linking the suspects to the offenses." Judge Guy Avnon added, "There are more senior people and less-senior people involved.”

The trigger for the detentions is the arrest months ago of a smuggler associated with Leviev's business group at Ben-Gurion International Airport. The man was suspected of trying to smuggle diamonds worth hundreds of thousands of shekels into Israel. He and a person accompanying him tried to pass through the "nothing to declare" path. Police questioning of the two suspects led them to believe that they had uncovered a vast diamond-smuggling business; one of the two men turned state witness. With his cooperation, an undercover investigation began. The probe lasted several months and found evidence of methodical diamond smuggling into Israel. The Times of Israel notes that the suspects were questioned under caution on suspicion of diamond smuggling, money laundering, tax offenses and conspiracy to commit a crime, filing false business reports and other offenses.

As Haaretz writes, "The close relationship between Leviev and Russian president Vladimir Putin has been widely reported," but why his group might be involved in smuggling diamonds the first place is unclear. Also unclear is how this case will affect Israel's diamond industry. "On the one hand, Leviev is one of the biggest rough diamond importers in the country; his businesses supply work to dozens of other companies that polish and market the stones through the Ramat Gan Diamond Exchange. These companies employ hundreds of people. If his business hurts, so may dozens more."