UK Clears India To Begin Extradition Process Against Modi ... If He's There 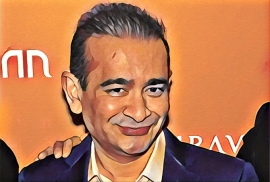 India has been informed by the UK's Crown Prosecution Service (CPS) that it can initiate extradition proceedings against Indian diamantaire Nirav Modi even though his exact whereabouts remain uncertain, a senior Indian official said today. According to Indian daily The Times of India, the Central Bureau of Investigation (CBI) has begun the process of filing an extradition request for Modi, which will then have to be approved by the UK Home Office following which an extradition warrant can be issued. However, they report, there is no confirmation about Nirav Modi's whereabouts, despite UK officials reportedly confirming Nirav Modi's presence in Britain.

The Indian jeweler Modi and his uncle Mehul Choksi, the head of the huge Gitanjali retail jewelry chain, went missing in February after allegations emerged of a more than $2bn fraud at the Punjab National Bank, India's second-largest state-run bank. Indian police issued a warrant for the billionaire diamond trader's arrest; his firm's Indian stores were closed, and assets were seized including bank accounts and luxury cars. Both Mr. Modi and Mr. Choksi have denied any wrongdoing. Earlier this week it was claimed that Modi had applied for political asylum in the UK. According to a Financial Times report, Modi is in London trying to claim asylum. The official site of the UK government says asylum is granted to refugees, and to be eligible one should be unable to go back because they are fearing persecution, not prosecution. So, a legitimate prosecution that leads to a lawful conviction following a fair trial could not give rise to a viable claim. However, if the charges were politically motivated or the trial was very unfair or excess punishment might result, the claim might succeed.

Current speculation is that Modi is hiding out in the UK, but the Indian authorities became aware of multiple Indian passports being used by the diamond merchant, with his last documented exit from the UK at the end of March by air to Paris. It remains unclear exactly how many passports Modi has been travelling on in the last few months, and strict data protection laws in the UK have prevented the British government from confirming if he has indefinite leave to remain (ILR) in the UK or if he has indeed sought political asylum. If he has ILR in the UK, he would have to be extradited. However, if that is not the case, he can be deported on the basis of illegally travelling to Britain using fraudulent travel documentation. "We are pursuing both these lines", the senior Indian official said. If Modi does go ahead with a political asylum request in the UK, it is likely to delay any extradition proceedings at the very least ... if he is indeed in the UK at all.