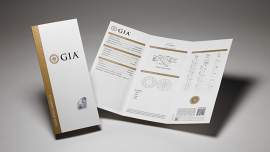 “The global gem and jewelry trade and consumers around the world rely on the independence of GIA’s science-based gemological reports and the industry-leading quality of GIA education,” said Jennifer Wilson, GIA general counsel, and senior vice president. “When others attempt to take advantage of GIA’s reputation and global recognition to create confusion in the trade and among consumers for financial gain, we will always respond with vigor and resolve.”

In handing down its decision, the court cited AIG’s ‘attempt to sail on the success of GIA’s marks’ and imposed penalty payments for prohibited use up to half a million euros. GIA turned to the courts for relief in their case after having made several requests and demands to AIG to cease infringing on GIA’s protected marks and logos. In March representatives of AIG in Belgium had been served with the court's decision, after which the company changed its name to Gem Report Antwerp.

GIA is vigorously pursuing an adjacent case on AIG-related entities in Israel.