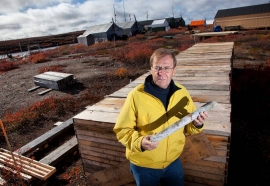 Fomer Dominion Diamond Mines CEO Patrick Evans is planning to launch a company making laboratory-grown diamonds, according to an article by Henry Sanderson of the Financial Times. Evans last month left Dominion - the world's third largest diamond producer by market value and Canada’s largest independent diamond producer - after just over a year at the helm. He is also the former CEO of Canada's Mountain Province Diamonds, a position he held for twelve years. His move follows that of Andrey Zharkov, the former president of Russian diamond miner Alrosa from 2015 to 2017, who last year announced his synthetic diamond project called Ultra C.

Sanderson writes that Evans has already secured investment from wealthy individuals as well as an undisclosed global jewelry company, and is searching for a location in the US with access to cheap solar power to produce lab-grown diamonds targeting the bridal market. Despite the fact that the price of synthetic diamonds have tumbled in recent years (see analysis by Paul Zimnisky, whose research shows that average discount for a 1-carat synthetic stone is 43% off a natural diamond), likely accelerated by De Beers' foray in to the market with its Lightbox brand of fashion jewelry, Evans - like Zharkov and other lab-grown brands - still feel confident that synthetic diamonds can be successful at a small discount to diamonds. “We don’t think it’s necessary to discount the product heavily,” Mr Evans said. “We think that we’ll be able to achieve natural pricing.”

Evans said his company would sell gem-quality diamonds larger than one carat for the engagement market and is targeting just a 15 to 20 percent discount off the cost of diamonds. Diamond Foundry, another notable synthetic-diamond company, even raised its prices by an average of 15% across all channels at the start of the year, citing demand outpacing supply. Early indiications are thus that De Beers' apparent intention in launching a low-priced line of synthetic-diamond jewelry - namely, to shift synthetic diamonds into a low-end market niche, undercutting their pricing and forcing others to follow suit, while establishing a clear separation between the syntethic and diamond markets - has failed to achieve its impact, though it is still early days. If anything, together with the decision of the US Federal Trade Commission to drop the word 'natural' from its definition of a diamond, essentially redefining 'diamond' to include non-mined gemstones, the distinction between natural and lab-grown diamonds is gradually being erased. As Zharkov told JCK's Rob Bates last August, "I see a very high interest in lab-grown diamonds from the companies that have been big dealers and processors in natural diamonds.”

Evans emphasized to FT that natural supplies of diamonds are gradually depleting, and there have been no significant discoveries of diamond mines, which are very hard to find. He expects natural diamond reserves to be almost completely depleted by the middle of the century. “I’ve explored on four continents," Evans told FT. "It’s about 1,000 times more difficult to find an economic diamond mine than a gold mine. The industry is just not investing in exploration.” Meanwhile, the cost of producting synthetic diamonds has fallen tremendously as the production technology has improved.