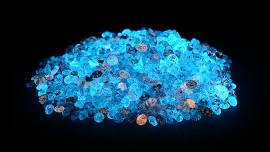 The Gemological Institute of America (GIA) last week published an article on a most curious discovery: "One Natural Melee Diamond Found in Large Batch of HPHT Synthetic Melee". More specifically, GIA’s New York laboratory received a batch of 1,102 melee diamonds with a total weight of 9.67 carats for the melee analysis service, and it turned out to be, "the largest percentage of undisclosed synthetic melee that GIA has seen." The odd thing about this parcel is that among the more than 1,000 undisclosed pieces of lab-grown melee was a single natural stone, an indication that the diamond world indeed seems to be standing on its head.

The GIA says that the increase in the amount of disclosed and undisclosed synthetic melee submitted to their laboratories for identification has exponentially increased since GIA began offering its Melee Analysis Service in 2016. Parcels of melee are often submitted with a mixture of naturals and synthetics, with typically a few synthetics are detected in batches of natural melee diamonds, known in the trade as “salting”. It is nothing short of unprecedented that an entire parcel would turn up on their doorstep with this particular makeup of goods. The tested melee ranged from 0.98 to 1.52 mm in diameter. Of the 1,102 diamonds, GIA’s fully automated screening device referred 1,093 for further testing, while nine were found to be outside of the service criteria. Further analysis using detailed spectroscopic analysis confirmed 1,092 out of the 1,093 to be HPHT synthetics. One sample out of 1,093 was confirmed as a natural diamond.

Stone Swapping: Trust No One

Earlier this month, the Israel Diamond Exchange (IDE) expelled two bourse members suspected of swapping natural diamonds with synthetics. The traders were allegedly took part in a scam to swap D-color, high-clarity polished diamonds weighing 3 to 5 carats with lab-grown stones, IDE president Yoram Dvash told Rapaport News. According to reports from the IDE, two bourse-affiliated traders showed up at an office to view the goods, and it was discovered afterwards through the use of detection equipment that the goods had been switched. Footage from closed-circuit television helped them track down the suspects, according to the source. One of the accused bourse members was expelled for life, while members for life, said IDE president Yoram Dvash, while the other suspect has been banned for 37 months.

According to a follow-up article by Rapaport's Joshua Freedman, "Trade ‘Blind to Diamond-Swapping Threat’", it appears that, "The switching of natural diamonds with synthetics or other lower-value goods is a common phenomenon to which many traders are oblivious", in the words of Dror Yehuda, president of Israel-based Yehuda Diamond Company. The detection equipment supplier could have a vested interest in his warning to diamantaires not to wait until an expensive loss occurs before taking action, but he did point out a worrisome trend: “Every week, people come, and we check [the diamonds] for them. Every week, we discover [synthetic] diamonds in jewelry and parcels - maybe four times a week.” And the fraudsters are becoming more sophisticated. Previously, the weight of the diamonds would be the standard check; now, "fraudsters are now using synthetics that match a natural diamond’s characteristics, enabling them to carry out a switch that can get past that type of test." The best advice is to check diamonds with detection equipment in real time, and to be on guard even when dealing with fellow bourse members. Sadly, a trade that has relied on a handshake to seal its deals now seems to be careening into X-files territory: "Trust no one."