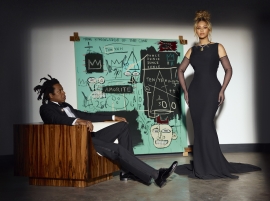 Tiffany & C° yesterday announced their new campaign, to be launched in print Sept 2 and campaign video and musical score on Sept 15, starring celebrity powercouple Beyoncé and Jay-Z - "The Carters", with the two as an iconic example of modern love. With a previously unexhibited Basquiat - "Equals Pi" (1982) - as a backdrop, the couple translates its "Love is the diamond that the jewelry and art decorate" mantra in a first released picture, Beyoncé adorned with the 128.54ct Tiffany diamond, while Jay-Z sports a reconstructed pair of one-of-a-kind cufflinks inspired by Jean Schlumberger's Bird on a Rock brooch. If anything, it is clear that under the leadership of LVMH, Tiffany's Executive VP of Product and Communications, Alexandre Arnault is planning to go all out in (re)claiming the luxury brand's space in the high-end jewelry scene.