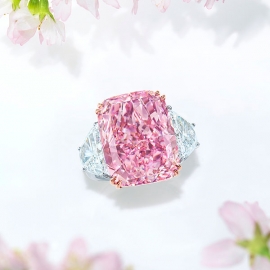 At Christie’s Magnificent Jewels auction in Hong Kong, the 15.81 carat Sakura diamond set the world-record auction price for a purple-pink diamond at US$29.3 million. At almost $1.9 million a carat, the cushion-cut stone became the most valuable diamond sold at auction so far this year. The diamond was purchased by a private Asian buyer. The Sakura diamond was named after the cherry blossoms at the beginning of spring in Asia, as it resembles its color.

The Sweet Heart, a 4.19 ct. heart-shape VVS1 fancy vivid pink was also sold to a private Asian client for US$6.6 million or US$1.6 million a carat. With a final total of US$76.8 million, the auction marked the biggest-earning Christie’s jewelry sale of the last four years.