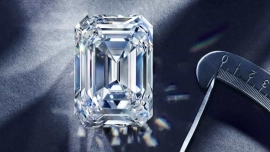 In Christie’s Magnificent Jewels auction in Geneva, "The Alrosa Spectacle Diamond", weighing an astonishing 100.94 carats, went under the hammer for US$14,2 million. Total sales during the May auction of 144 lots garnered US$63.8 million Christie's announced.

The emerald-cut, Type IIA, D-Color, Internally Flawless diamond was polished from a 207.29-carat rough gem unearthed in 2016, from the Zarnitsa kimberlite pipe in Yakutia. The diamond is the largest ever manufactured in Russia and took one year and eight months to cut and polish at the ‘Diamonds of ALROSA’ cutting factory in Moscow. The Spectacle's pre-auction estimate was set to be between US$13 million and US$19 million.

Other notable items were a nine-piece set belonging to Stephanie de Beauharnais, the grand duchess of Baden and adopted daughter of Napoleon I. The parure, or set, featured a tiara, a collier, a pair of earrings, a ring, a bracelet, two pendants, and two brooches. These jewels, along with the sapphire crown of Maria II, Queen of Portugal, raked in a total of US$3.6 million.

Fancy-colored and shaped diamonds fared quite well as an oval-cut, 15.23-carat, fancy-intense-pink diamond, sold for US$9.5 million. A rectangular-cut, 8.06-carat, fancy-purplish-pink diamond ring by Boucheron also performed well, earning US$3.5 million, double its high estimate. A heart-shaped brilliant-cut, 53.53-carat, D-color diamond pendant sold for US$3.1 million, which was close to its upper valuation.

“Christie’s saw strong bidding from all over the world both online and on the telephone, with clients back in the room for the first time in over a year,” said Max Fawcett, head of Christie's jewelry department. “The market demonstrated incredible strength, and prices were strong in both diamonds as well as historic and signed jewelry.” Christie’s sold 91% of their lots to participants from 50 countries, with 13 of the jewels selling for more than US$1 million, the auction house added.