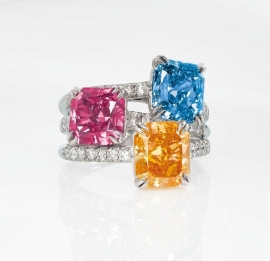 Christie’s Magnificent Jewels auction in New York amassed US$35 million in sales, US$8.4 million of which came from a trio of colored diamonds, entitled “The Perfect Palette.” The diamonds were each set in a ring and auctioned as separate lots.

First up in the trio was a fancy vivid blue diamond ring of 2.13 carats, which sold for US$2.7million, well above the pre-auction estimate of US$2 million. The second - a 2.17-carat, fancy-vivid-purplish-pink diamond ring - went under the hammer at US$3.5 million, a million over its high estimate. The third and final piece in the trio - a 2.34-carat, fancy-vivid-orange diamond ring – sold for $2.2 million. Other lots included a 38.04-carat pear brilliant-cut, D flawless, Type IIa, diamond ring, which yielded $3 million, and a Burmese ruby ring sold for $1.7 million.

The entire auction consisted of 216 lots, of which 94% of the items found buyers, and nine pieces sold for more than a million each. Participants at the sale originated from 40 countries across five continents, Christie’s noted.