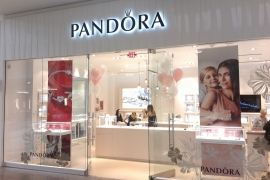 The Copenhqgen-based cotume jewelry giant Pandora has announced the temporary closure of all of its owned & operated stores in the U.S., Italy, Germany, France and Spain, and in most other European markets in an effort to limit the spread of the coronavirus. They have additionally temporarily closed many of our stores around the world, along with most of their offices. Office staff is working from home. Pandora employs 28,000 people worldwide.

The company also communicated despite the closures, they will continue to support their employees with normal scheduled base pay for at least 8 weeks from when staff are sent home. "By then we hope the situation will have improved, but we will adjust our approach, if necessary. Where available, we will seek support from relevant government relief programmes to help fund salary payment during closures."

Ealier this week the company announced that as a consequence of the global escalation of the situation, the financial guidance for 2020 "is no longer meaningful and hence now withdrawn." Their financial guidance announced on 4 February 2020 excluded any impact from COVID-19. At the time, the company had forecast revenue would fall between 3% and 6% for the year.

Pandora said its financial performance was strong in January and February with particularly good development in the Online Store and in some key markets generating positive like-for-like. Total like-for-like excluding China was better than the full-year financial guidance but the COVID-19 escalation has led to material weakness in sales across markets. In China, like-for-like has fallen 70% to -80% since late January. Revenue is currently slightly improving, but a return to normal demand will expectedly take time and be outside the control of Pandora. The European markets, and Italy in particular, have been visibly impacted since late February. Italy generated solid positive like-for-like in January and February, while trading in March has now almost come to a complete halt.