Edward Asscher Retires, Passes Business on to Daughter and Son 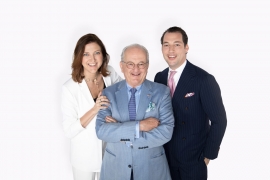 The Royal Asscher Diamond Company’s president, Edward Asscher, has retired on his 50th anniversary with the company. "You have to able to let things go in life," he said. "There comes a time when you should no longer stand in the way of continuity. The next generation has to determine the further course on their own." Edward Asscher said he is delighted that his daughter, Lita Asscher and son, Mike Asscher, will be taking over the company as co-presidents. Lita (42) is responsible for America, while Mike (39) will take care of business in Asia and Europe. Lita is the first woman ever to lead the diamond house.

It all started in 1854, when Isaac Joseph Asscher left his job as a shoemaker and established the I.J. Asscher firm in Amsterdam. Edward Asscher, representing the fifth generation, joined the family business in 1970, apprenticing with his father and uncle, before stepping up as president in 1980. He worked alongside his brother Joop, who passed away in 2006, for 36 years. Upon taking the company’s helm, Edward Asscher expanded Royal Asscher’s reach in the international market, creating a presence and developing strategic partnerships across the globe. With his children, the family’s sixth generation, Royal Asscher began to focus on the manufacturing of fancy cut diamonds, investing in innovative technology, which led to the patenting of four proprietary diamond cuts based on much adored and popular existing shapes. The Royal Asscher Cut has achieved world renown.

"Our industry has had its challenges in many aspects, but ethical standards, transparency, innovation, and professionalism have become the norm and will keep the industry as beautiful as the product itself," he said. "I now leave, with full confidence that the future of Royal Asscher is in the able hands of the next generation!”