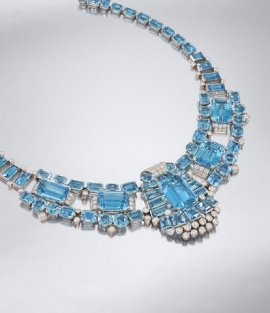 An Art Deco aquamarine and diamond necklace by Cartier, dated circa 1940, sold for £459,062 (approx. $601,399) including premium, at Bonhams' London Jewels sale, tripling its pre-sale estimate of £100,000 - 150,000 (est. high of $197,440). The auction house says that the highly articulated geometric necklace, set with nearly 170 carats of beautifully matched aquamarines, was an impeccable example of Cartier's late Art Deco style and sparked an international bidding war. The necklace headlined headlined the selection of Art Deco jewelry and timepieces from the most coveted jewellery houses - including Cartier and Lacloche Frères.

The Cartier Art Deco Aquamarine and Diamond necklace is described as "a perfect example of Cartier’s late Art Deco style, for which the French jeweler is internationally recognised." Emily Barber, Bonhams UK Jewelry Director, says: "From the 1930s Cartier used aquamarines in their designs. This necklace is a magnificent example of how the Maison elevated the transparent pale-blue gem to the forefront of contemporary high jewelry design."

A "rare private collections of Art Deco clocks" also collectively exceeded its estimate, selling for £1,154,930 (over $1.5 million). The collection of 23 clocks, of which 22 were by Cartier mainly from the Art Deco era, were the subject of fierce competitive bidding during the sale, Bonham's confirms, "The star performer was A 'Model A' Art Deco Rock Crystal, Gold, Agate, Enamel and Diamond-Set 'Mystery Clock', by Cartier, made in 1919. This extremely rare and early example of the first type of mystery clock, known as 'Model A', features the 'mystery' illusion of the hands appearing to float in space without any connection to the movement. It sold for £603,062 ($793,732) exceeding its pre-sale estimate of £150,000 - 250,000 ($197,000 - 329,000). pieces of jewelry from the private collection of international bestselling author Barbara Taylor Bradford OBE all sold during the sale, many of which also smashed their pre-sale estimtes.