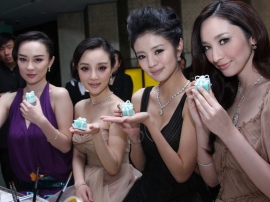 Tiffany & Co. earlier this month announced plans to enter the India market, and recently said they would be increasing their presence in China following a quarter in which they saw double-digit growth with local customers in Mainland China, together with a decline in tourist purchases which impacted their Q2 results.

In their Q2 2019 Results - Earnings Call with analysts, CEO Alessandro Bogliolo Global said that while sales did drop by 3%, this was by comparison with the high benchmark of last year's 12% increase; they also faced a significant decline in sales attributed to Chinese as well as all other tourists and have seen meaningful business disruption in Hong Kong. Tiffany's has 10 stores in Hong Kong and it is their fourth biggest market after the United States, Japan and Mainland China. "Obviously," he said, "we hope for a quick and peaceful resolution to the unrest being experienced there, but in the meantime, we must acknowledge that the current situation is taking a toll on our business." Meanwhile, he noted that for the past 18 months they have been taking decisions about Mainland China, "A key strategic market which from the beginning of this journey we have identified to receive a high level of management focus and investment."

Bogliolo noted that sales in Mainland China in H1 2019 grew 4 times faster than in H1 2018 and Q2 2019 sales grew more than 25%. "In order to maintain this momentum, we have a number of real exciting strategically important initiatives, some have already begun, and others will take place in the second half of the year across Greater China, all of which are designed to continue to broaden our appeal among Chinese consumers." These include: strengthening their store network by opening or upgrading flagship stores in three key metropolitan areas, Beijing, Shanghai, and Hong Kong; expanding their airport duty-free store network; increasing their e-commerce scope and scale; finally, they have set up new marketing initiatives for the second half of 2019. "First, we plan to open Blue Box Cafes in both the new Hong Kong location as well as the next Shanghai flagship at Hong Kong Plaza. This will be the first permanent Blue Box Cafes in Tiffany stores outside of New York. And just as in New York, we expect it will generate substantial customer attention and store traffic. They will also be conducting a series of consumer-facing Diamonds of Tiffany events across Greater China to educate consumers, and on September 23, in Shanghai, "we will inaugurate Tiffany & Company Vision & Virtuosity, the largest ever Tiffany brand exhibition. The brand will celebrate its over 180-year history and heritage in a unique experiential setting." Generally, they intend to increase their jewelry offering in Mainland stores, as Chinese locals have increasingly been spending more locally rather than travelling to Hong Kong.

On August 7, Tiffany & Co. announced that, together with Reliance Brands Limited, they were planing to enter the India market. Through a joint venture, Tiffany plans to open new stores in Delhi in fiscal 2H 2019 and Mumbai in 2H 2020, capitalizing on its already strong image and brand awareness in this emerging and style conscious luxury market. “As a global luxury jeweler with stores in many of the world’s most important cities, Tiffany’s emergence in these Indian commerce centers with their growing luxury consumer base presents a unique opportunity,” said Philippe Galtié, executive vice president of global sales, Tiffany & Co. “We are proud to work with India’s leader in luxury retail, RBL, to develop a meaningful presence and further expand our brand equity in this important market.”

Tiffany operates more than 320 stores in more than 25 countries with over 80 in Asia-Pacific, as well as ecommerce websites in 14 markets. “Tiffany needs no introduction in India – it is iconic and timeless,” said Darshan Mehta, president & CEO of Reliance Brands. “We look forward to bringing Tiffany’s renowned jewelry collections and superlative diamonds to India.”