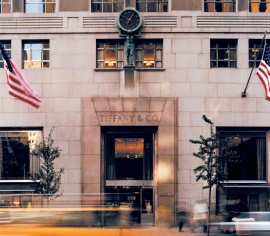 Revenue in the Americas, where Tiffany has the largest footprint in terms of its number of stores, fell 4% to $455 million due in part to a dip in sales from both local and foreign customers. Foreign tourists spent less in Asia as well, but only by 1% to $298 as Tiffany saw double digit growth in its China sales. The company attributed the slight decline to foreign currency losses due to the devaluation of the yuan against the dollar. They also pointed to the opening of new stores and increased wholesale sales. “As with the first quarter, we are encouraged in the second quarter by sales growth attributed to our local customer base globally, which was again led by double-digit growth in mainland China,” said Tiffany CEO Alessandro Bogliolo. However, he also noted that the quarter was “mixed,” citing “weak demand from foreign tourists, currency exchange rate pressures, and continuing business disruptions in Hong Kong.”

Tiffany maintained its full-year profit forecast for fiscal 2019, but also warned its revenue guidance was at risk if protests in Hong Kong continued and the rollout of its new product offering takes longer than expected. The jeweler lost six selling days in its second quarter due to unplanned store closures in Hong Kong, which is its fourth-largest market and makes up a “mid-single digit” proportion of total annual sales. “If the situation would deteriorate even further or if the current level of unrest was maintained for the balance of the fiscal year, we may find ourselves at the bottom end of our ranges,” CEO Mark Erceg said of the company’s full-year sales and earnings forecasts during an earnings conference call. Over the past year, the company has been impacted by developments including weak luxury spending among tourists, a strong US dollar and tariffs stemming from Donald Trump’s trade war with China. For fiscal 2019, the company expects net earnings to increase by a low-to-mid-single-digit percentage and sales will by a low-single-digit percentage.